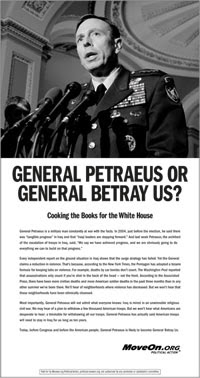 Did you know that Petraeus did not testify under oath before the joint hearing of the House Armed Services Committee and the House Foreign Affairs Committee yesterday?

“Swear him in.” That’s all I said in the unusual silence this afternoon as first aid was being administered to Gen. David Petraeus’s microphone at the hearing before the House Armed Services and Foreign Affairs Committees.
It had dawned on me that when House Armed Services Committee Chairman Ike Skelton, D-Missouri, invited Gen. Petraeus to make his presentation, Skelton forgot to ask him to take the customary oath to tell the truth, the whole truth, and nothing but the truth. I had no idea that would be enough to get me thrown out of the hearing. Ray McGovern, Consortium News, 9-11-07

Do you know how twisted his metrics are?

First, no independent assessment has concluded that violence in Iraq is down. On the contrary, estimates based on morgue, hospital and police records suggest that the daily number of civilian deaths is almost twice its average pace from last year. And a recent assessment by the nonpartisan Government Accountability Office found no decline in the average number of daily attacks.
So how can the military be claiming otherwise? Apparently, the Pentagon has a double super secret formula that it uses to distinguish sectarian killings (bad) from other deaths (not important); according to press reports, all deaths from car bombs are excluded, and one intelligence analyst told The Washington Post that "if a bullet went through the back of the head, it's sectarian. If it went through the front, it's criminal." So the number of dead is down, as long as you only count certain kinds of dead people.
Oh, and by the way: Baghdad is undergoing ethnic cleansing, with Shiite militias driving Sunnis out of much of the city. And guess what? When a Sunni enclave is eliminated and the death toll in that district falls because there's nobody left to kill, that counts as progress by the Pentagon's metric. Paul Krugman, Time to Take a Stand, New York Times, 9-7-07

Did you know that nine more US soldiers died in Iraq during this charade in Beltwayistan?

Nine U.S. troops were killed in Iraq, the military announced Monday, including seven who died in a vehicle accident in northwestern Baghdad. Washington Post, 9-11-07

Did you know that two of those who died that day were among the seven NCOs who wrote a powerful op-ed piece in the NY Times recently?

Last month, seven 82nd Airborne soldiers in Iraq wrote a harsh and powerful assessment of the war. The historic piece ran as an op-ed in The New York Times, stating in part:   To believe that Americans, with an occupying force that long ago outlived its reluctant welcome, can win over a recalcitrant local population and win this counterinsurgency is far-fetched.  Today, it was announced that two of those soldiers have died in a vehicle accident in Baghdad.
I was gutted when I heard the news this morning. Like so many other Iraq veterans, I read the paper every day and go directly to names of the dead -- fearfully looking for names I know. Our staff reviews and posts the names of those killed in action every day on the "Honor the Fallen" section of IAVA's homepage, and not one of them is easy. But this news was especially tough for me to swallow. I really looked forward to one day meeting these brave, articulate and thoughtful soldier-statesmen -- or seeing them run for office. Paul Rieckhoff, Huffington Post, 9-12-07