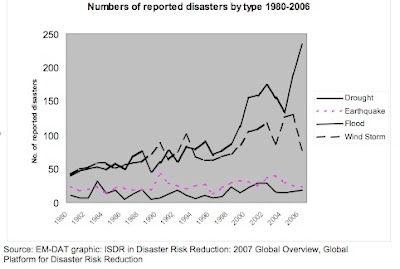 The Oxfam report is spot-on, and reaffirms my analysis since 2000, both in its findings and its recommendations.

Here is the report's summary, followed by a link to the full text:

Climatic disasters are on the increase as the Earth warms up – in line with scientific observations and computer simulations that model future climate. 2007 has been a year of climatic crises, especially floods, often of an unprecedented nature. They included Africa’s worst floods in three decades, unprecedented flooding in Mexico, massive floods in South Asia and heat waves and forest fires in Europe, Australia, and California. By mid November the United Nations had launched 15 ’flash appeals’, the greatest ever number in one year. All but one were in response to climatic disasters.

At the same time as climate hazards are growing in number, more people are being affected by them because of poverty, powerlessness, population growth, and the movement and displacement of people to marginal areas. The total number of natural disasters has quadrupled in the last two decades – most of them floods, cyclones, and storms. Over the same period the number of people affected by disasters has increased from around 174 million to an average of over 250 million a year. Small- and medium-scale disasters are occurring more frequently than the kind of large-scale disasters that hit the headlines.

However, dramatic weather events do not in themselves necessarily constitute disasters; that depends on the level of human vulnerability – the capacity to resist impacts. Poor people and countries are far more vulnerable because of their poverty. Disasters, in turn, undermine development that can provide greater resilience.

One shock after another, even if each is fairly small, can push poor people and communities into a downward spiral of destitution and further vulnerability from which they struggle to recover. Such shocks can be weather-related, due to economic downturns, or occur because of conflict or the spread of diseases like HIV and AIDS. Such shocks hit women hardest; they are the main collectors of water and depend most directly on access to natural resources to feed their families; they have fewer assets than men to fall back on, and often less power to demand their rights to protection and assistance.

There is hope. The global humanitarian system has been getting better at reducing death rates from public-health crises following on from major shocks like floods or droughts. But humanitarian response is still skewed, for example to high-profile disasters, and it will certainly be woefully inadequate as global temperatures continue to rise, unless action is taken quickly.

New approaches to humanitarian action are needed as well as new money. Political efforts aimed at reducing poverty and inequality, which provide people with essential services like health and education, and offer social protection (a regular basic income, or insurance), constitute a firm foundation for effective disaster risk reduction (DRR), preparedness, and response. More work needs to be done to understand the linkages between development, DRR and climate change adaptation, and therefore to more accurately assess the financial costs climate change will impose.

Fundamentally, the world has an immediate responsibility to stem the increase in climate-related hazards. Above all, that means tackling climate change by drastically reducing greenhouse-gas emissions.

Mitigate: Greenhouse-gas emissions must be reduced drastically to keep global average temperature rise as far below two degrees Celsius as possible. Rich countries must act first and fastest. The next UN climate-change conference in Bali in December is a vital opportunity.

Adapt: Oxfam has estimated that, in addition to funding for emergency response, developing countries will require at least US$50bn annually to adapt to unavoidable climate change. These funds should be provided by rich nations in line with their responsibility for causing climate change and their capacity to assist. Additional finance for adaptation is not aid, but a form of compensatory finance; it must not come out of long-standing donor commitments to provide 0.7 per cent of gross domestic product as aid in order to eradicate poverty. At present, funding for adaptation is totally inadequate, and the forthcoming UN climate conference in Bali in December must mandate the search for new funds. Innovative financing mechanisms need to be explored.

Increase emergency aid: Major donor governments must keep their promises to increase Overseas Development Aid by an additional US$50bn a year by 2010. If they do, then humanitarian aid is likely to increase in proportion from over US$8bn to over US$11bn. But aid is going in the wrong direction, and anyway this is unlikely to be enough; increased warming and climate change pose the very real danger that humanitarian response will be overwhelmed in the coming decades. More money and better responses are both needed.

Ensure fast, fair, flexible, appropriate aid: This should include moving away from over-reliance on in-kind food aid, towards more flexible solutions such as cash transfers.

Reduce vulnerability and the risk of disaster:

Build long-term social protection: Climate change is accentuating the fact that for many poor people, shocks are the norm. Governments must put poor people first. Aid should be used to build and protect the livelihoods and assets of poor people. Providing essential services like water, sanitation, health and education, and long-term social protection systems form the foundations for timely emergency scale-up when required.

Invest in disaster risk reduction (DRR): Governments have made commitments to make the world safer from natural hazards through investing in DRR approaches. They need to put their promises into action and link DRR to both climate-change adaptation measures and to national poverty reduction strategies.

Build local capacity: Build the capacity of local actors, particularly government at all levels, and empower affected populations so they have a strong role and voice in preparedness, response and subsequent recovery and rehabilitation.

Do development right: Development aid should integrate analyses of disaster risk and climate trends. Inappropriate development strategies not only waste scant resources, they also end up putting more people at risk, for instance by the current reckless rush to produce biofuels without adequate safeguards for poor people and important environments.

To help Oxfam in its vital mission, click here.

Want to wake people up to the US mainstream news media's complicity in misinforming the public on global warming and climate change? Click here for Media Matters' compilation of "Myths and Falsehoods about Global Warming".

Want to join hundreds of thousands of people on the Stop Global Warming Virtual March, and become part of the movement to demand our leaders freeze and reduce carbon dioxide emissions now? Click here.

And don't forget to tune into Eco-Talk Radio on the air waves and/or in cyberspace.