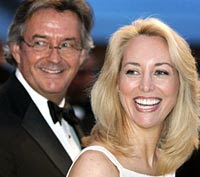 In early fall 2003, George W. Bush joined in what appears to have been a criminal cover-up to conceal the role of his White House in exposing the classified identity of covert CIA officer Valerie Plame Wilson. That is the logical conclusion one would draw from a new statement by then-White House press secretary Scott McClellan when it is put into a mosaic with previously known evidence. ... In October 2005, Fitzgerald indicted Libby on five counts of lying to federal investigators and obstructing an investigation. Libby was convicted on four of five counts in March 2007 and sentenced to 30 months in jail, but Bush commuted Libby's sentence to spare him any jail time. That also eliminated any incentive for Libby to turn state's evidence against Bush and Cheney. Now, however, McClellan has become the first White House insider to acknowledge the original lies that senior administration told about the Plame-gate affair - and to put the President in the middle of the cover-up.
The next question might reasonably be: what are the Democrats in Congress going to do about it? Robert Parry, Consortium News viat Truthout, 11-21-07

There is treason in high places. And no, the term is not used in a cavalier way.

To support the Wilsons in their legal fight, click here.

To purchase Fair Game: My Life as a Spy, My Betrayal by the White House from Buzzflash, click here.

Here are some excerpts from the Wilsons' latest statement, with a link to the full text at the Huffington Post:

"I have nothing but contempt and anger for those who betray the trust by exposing the name of our sources. They are, in my view, the most insidious, of traitors." -- George Herbert Walker Bush, CIA dedication ceremony, April 26, 1999.

When Bush administration officials I. Lewis "Scooter" Libby, Karl Rove, Richard Armitage and Ari Fleischer betrayed Valerie Plame Wilson's identity as a covert CIA operations officer, they fell into the category of "the most insidious of traitors." Now we learn from the president's former press secretary, Scott McClellan, that the president himself "was involved" in sending him out to lie to the American public about the betrayal. ...

With the exception of MSNBC's Keith Olbermann, Chris Matthews, and the intrepid David Shuster, the mainstream media would have you believe that McClellan's revelation is old news. ...

So far there is no apparent desire for redemption driving the press to report on the treachery of senior officials. Instead, the mainstream press has compounded its complicity by giving the Bush administration yet another free pass and shifting blame. The New York Times failed to publish an article on McClellan's revelation and The Washington Post buried it at the end of a column deep on page A-15 in the newspaper. Earlier in the week, Newsweek magazine, owned by the Washington Post Company, proudly announced the identity of its new star columnist -- Karl Rove, one of the key actors in this collective treason. Robert Novak, who willfully disclosed Valerie's identity, having been twice warned not to do so by the CIA, and who transmitted his column to Rove before it was published, remains a regularly featured columnist in The Washington Post. ...

Presidents and those who aspired to be president in the past once took strong positions in defense of U.S. national security. Today, Republican presidential candidate Fred Thompson has tried to build his support through fronting for the Scooter Libby Defense fundraising efforts. Meanwhile, other Republican candidates accuse Patrick Fitzgerald of being "a runaway prosecutor" and remain silent about the stain on Bush's presidency.

Where is the outrage? Where is the "contempt and anger?" Joe Wilson & Valierie Plame, Treason is Not Old News, Huffington Post, 11-22-07

Hard Rain Journal 11-8-07: Who Will Rescue The Goddess of Liberty from Her Abusers & Their Enablers in the US Congress?

Hard Rain Journal 7-4-06: Latest Report on Fitzgerald Investigation -- Bush Told Cheney to "Get It Out!"

Hard Rain Journal 6-13-06 (Continued): If Treason Occurs, But Everyone Pretends It Didn’t, Is It Still Treason?