Crisis in Darfur Update 11-29-07: Dream for Darfur Flunks Visa, Microsoft, Coca Cola and Others; The Reputation of the Olympics is At Risk 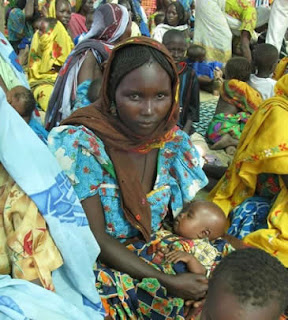 Crisis in Darfur Update 11-29-07: Dream for Darfur Flunks Visa, Microsoft, Coca Cola and Others; The Reputation of the Olympics is At Risk

This life is a oneness.

And yet, the slow-motion genocide in Darfur has gone on for years, largely uninterrupted by either the governments of the world or the global business community. This numbness and blindness are symptomatic of a serious spiritual illness in our own societies.

Visa, Coca Cola, Anheuser-Busch, Microsoft, Volkswagen and others intend to proudly unfurl their banners at the 2008 Summer Olympics in Beijing; and by doing so, they will being participating, lucratively and prominently, in the Chinese government's effort to project a happy face to the world.

But behind that happy face is a grim hybrid of totalitarian politics and naked capitalism both domestically and internationally.

No government in the world has as much influence on the thugocracy in Karthoum; and up to this point, they have looked the other way in regard to the genocide in Darfur.

According to a report card issued by Dream for Darfur, nineteen top Olympic sponsors, including Visa, Coca Cola, Anheuser-Busch, Microsoft, Volkswagen and others, received grades of either "F" or "D" for their inadequate "corporate social responsibility responses" on the issue of Darfur and its implications for the 2008 Olympics.

As Dream for Darfur declares, Visa, Coca Cola and the others have a "special obligation" to "live up to their own statements of 'social responsibility' and their duty as Olympic sponsors," i.e., they must take action on Darfur before the Games begin next August.

Until they do, in a real and meaningful way, the small plastic card (Visa) that you swipe at the store, the car you drove there in (Volkswagen) the six packs of soda (Coke) and beer (Budweiser) that you purchase with it, the software (Microsoft) that you use while you sit at your computer sipping from those cans, are all tainted with genocide.

Here are some excerpts from Dream to Darfur's statement, along with a link to the full report.

Dream for Darfur is using the 2008 Olympic Games as leverage to press China, Sudan's strongest business and political partner, to take urgent action to end the Darfur crisis. The slaughter and insecurity in Darfur have been on the rise, with more than 200,000 deaths, and 2.5 million people displaced since 2003. Despite hopes for progress this summer, there has been no viable movement toward peace. Experts agree that China has unrivaled leverage with Khartoum and could exert influence to allow an international force of peacekeepers into Darfur.

"Sponsors are supporting China's efforts to position itself in glowing terms on the world stage. But they are silent about China's role in the Darfur genocide, and in their silence, they are complicit," said Jill Savitt, Executive Director of Dream for Darfur.

Over the course of 16 weeks (May to October 2007), Dream for Darfur asked 19 Olympic sponsors (all 12 Worldwide Olympic Partners and seven Western-based sponsors and suppliers) to undertake specific steps to communicate to China the problematic nature of its role in Darfur. The group then graded each company on its response to the Darfur crisis in the report card released today.

Corporate sponsors must demand China use special role on Darfur to
save reputation of 2008 Games.

To view Dream for Darfur's report, "And Now ... Not a Word from Our Sponsors," click here.