A Note to Jack Kerouac

Jack Kerouac's slab in the alley behind City Lights, at the intersection of Chinatown and North Beach, July 2011, Photo: Richard Power 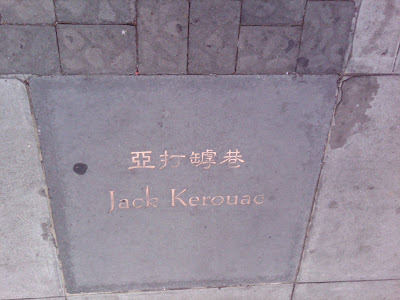 Jack, I met all of your books on the road. Not in a boxcar rumbling into the West, but on an A-Train hurtling downtown, late in the night, at a too tender age, when child soldier risk analysis said it was safer in the NYC subway than in my own "home."

When I was cold and wet, I set fire to the pages to warm myself; when I was hungry, I poured Extra Virgin Olive Oil on them and ate them like freshly baked bread. But of course, I read them all first.

I followed your Desolation Angels, and leaped after them into the Golden Eternity, soaring and falling for years until I came to the age at which you shed this mortal coil, then it occurred to me that I should not follow your navigational charts into the dark currents of the Lethe, and that I should, instead, travel the Danube, the Yangtze, the Mississippi, the Ganges, the Amazon and the other great rivers of this Earth awhile longer.

And so as much as I loved your company, I parted with it, lingering on the near shore listening to your tears and laughter drifting farther and farther into the mists of a different world. Leaving me to plot my own course, and thus enabling me to take these photos and write you this note. Yes, the Beat is still strong in the city of St. Francis. Yes, I have lived here for years. And yes, I still hear your bellowing performances carried in from the sea, at nightfall, on the summer fog.