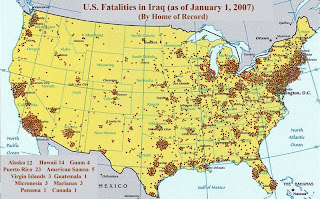 Image: US Fatalities in Iraq, as of January 1, 2007, by Home of Record, Source: Iraq Coalition Casuality Count

You do realize what W. Jong-il really said, don't you?

He confirmed that the Bush-Cheney national insecurity team -- with the assistance of its Renfields in the Senate (Lieberman and the shell-of-a-man-formerly-known-as-John McCain) -- are going to attempt to lead the USA into an attack on Iran; despite the results of the US mid-term elections, the unprecedented resistance of US military professionals, and the lack of support even within the right-wing of his own political party.

In the years leading up to 911, the champions of the PNAC agenda waxed poetically concerning their need for a new "Pearl Harbor."

They had to abort the 2000 election to force their way into power, and then they had to shut their eyes and stick their fingers in their ears, but they got it.

Now they need a new Gulf of Tonkin to turn the page and move on to the next chapter.

Here is a simple question that the US mainstream news media (MSM) will not ask:

Who is killing US military personnel in Iraq? Is it the Sunni or the Shia?

My guess is that Sunni factions are responsible for most of the 3000+ US military deaths in Iraq.

Nor is it even the Al Qaeda faction among the Sunni insurgents, as Juan Cole observes: ...the main problem is not "al-Qaeda," which is small and probably not that important, and anyway is not really Bin Laden's al-Qaeda. They are just Salafi jihadis who appropriated the name. When their leader, Abu Musab al-Zarqawi, was killed, it didn't cause the insurgency to miss a beat. Conclusion: "al-Qaeda" is not central to the struggle. Izzat Ibrahim Duri and the Baath Party are probably the center of gravity of the resistance. (Juan Cole, Informed Comment, 1-11-07)

And yet, W. Jong-il didn't threaten Saudi Arabia, or the secular Baathists, in his speech announcing the Splurge, he threatened Iran and Syria.

It wasn't a Saudi consulate that was stormed at three a.m. this morning, it was an Iranian consulate (AP, 1-11-07); and it was Shiite militiamen that PM Maliki threatened with an all-out assault, if they do not disarm (AP, 1-11-07).

The Bush-Cheney national insecurity team is pursuing the PNAC agenda (one way to say it). It is doing the bidding of the Saudi royals and Israeli neo-cons like Netanyahu (another way to say it). And it is serving the corporatist interests of those behind it all, i.e., the Oiligarchy and the Military-Industrial-Entertainment Complex (the truth of it).

They want to provoke a regional war.

Perhaps the bitterest irony in all of this folly is that they are withdrawing troops from Afghanistan for their Splurge in Iraq.

Bin Laden, Zawahiri and Mullah Omar are still at large.

The Taliban is resurgent.

Here are two more questions that the US MSM won't ask:

1. Are Sens. Richard Lugar (R-IN), Arlen Spectre (R-PA) Gordon Smith (R-OR), Chuck Hagel (R-NE), Sam Brownback (R-KS), Norm Coleman (R-MN), Olympia Snow and Susan Collins (R-ME) serious in their opposition to this escalation in the service of the PNAC agenda, or are they merely posturing for temporary relief until the PNAC narrative takes over again after a new "Gulf of Tonkin"?

2. Will the Democratic Party leadership have the courage to stand up to those who falsely claim to champion Israel's protection, when, in reality, they are actually advancing the aims of the Oiligarchy and the Military-Industrial-Entertainment Complex at the Israeli people's further peril?

According to Bob Geiger, a great blogger with a keen ear to Capitol Hill, Speaker Nancy Pelosi (D-CA) says that the Democrats "will not be swift-boated on this issue."

Let us hope there is some gallantry in those who stand beside and behind her.

You may think that I am exaggerating by dubbing George W. Bush "W. Jong-il." But I do not use the term frivolously. If it were not for his father, Jong-il would not have assumed the role of maximum leader in Pyongyang. And if it did not serve the interests of some coalescence of powerful elites within the ruling circle, he would not still be playing the role of maximum leader in Pyongyang. Furtermore, a society run on thought control and scarcity is just the kind of the future that the Bush-Cheney regime -- with its economic war on the US middle class and its extralegal assault on the US Constitution -- has in mind for the "Homeland."

The situation is spiraling out of control. Our circumstances demand that you know more than the simple fact that Bush-Cheney regime has been a disaster. You must ask yourself how is it possible for them to still be powerful enough to lead this nation and the world into a self-fulfilling prophecy of apocalypse?

For your further study, here are some brief excerpts from to relevant stories, with links to the full texts:

Serious Israeli strategists know that the best way to hinder Iran is to (1) work to reduce the price of oil to undermine the economic basis of Iran's growing pretensions; (2) to work covertly to "stir up trouble" inside Iran among its own interest groups -- much like Iran is doing to the U.S. inside Iraq; and (3) to find ways to tacitly work with and recognize other power centers inside Iran rather than the relatively weak but hyperbolic President Ahmadinejad. Steve Clemons, The Washington Note, 1-8-07

As the surge an orchestrated distraction from the real war plan? A good case can be made that it is. The US Congress and media are focused on President Bush’s proposal for an increase of 20,000 US troops in Iraq, while Israel and its American neoconservative allies prepare an assault on Iran. Commentators have expressed puzzlement over President Bush’s appointment of a US Navy admiral as commander in charge of the ground wars in Iraq and Afghanistan. The appointment makes sense only if the administration’s attention has shifted from the insurgencies to an attack on Iran. Paul Craig Roberts, Antiwar.com, 1-10-07

On Jan. 4, Bush ousted the top two commanders in the Middle East, Generals John Abizaid and George Casey, who had opposed a military escalation in Iraq, and removed Director of National Intelligence John Negroponte, who had stood by intelligence estimates downplaying the near-term threat from Iran's nuclear program. Most Washington observers have treated Bush's shake-up as either routine or part of his desire for a new team to handle his planned "surge" of U.S. troops in Iraq. But intelligence sources say the personnel changes also fit with a scenario for attacking Iran's nuclear facilities and seeking violent regime change in Syria. Robert Parry, Consortium News, 1-8-07

If engagement with Iran and Syria was even remotely on the agenda, Abizaid is exactly the man you'd want on the job at Centcom overseeing US forces and strategy in the region. But if that's not on the agenda, if you're thinking instead of using force against Iran and/or Syria, then Admiral Fallon is exactly the man you'd want at Centcom. Michael Klare, Ominous Signs of a Wider War, The Nation, 1-8-07

"The trouble is that their love of Israel distorts their judgment and blinds them from seeing what's in front of them," argues Shulamit Aloni, a veteran of Israel's war of independence who went on to serve in the Knesset and as a minister in several Israeli cabinets. "Israel is an occupying power that for 40 years has been oppressing an indigenous people, which is entitled to a sovereign and independent existence while living in peace with us."
In a defense of Carter penned for the mass-circulation Israeli newspaper Yediot Acharonot, the woman who served as former Prime Minister Yitzak Rabin's education minister wrote that, "Indeed apartheid does exist here."
"The U.S. Jewish establishment's onslaught on former President Jimmy Carter is based on him daring to tell the truth which is known to all: through its army, the government of Israel practises a brutal form of Apartheid in the territory it occupies," explains Aloni. "Its army has turned every Palestinian village and town into a fenced-in, or blocked-in, detention camp. All this is done in order to keep an eye on the population's movements and to make its life difficult. Israel even imposes a total curfew whenever the settlers, who have illegally usurped the Palestinians' land, celebrate their holidays or conduct their parades."
Aloni should be reminded that the battering of Carter has as frequently come from non-Jews as Jews in the U.S. But, with that clarification, her message is one that merits serious attention from Americans who are frustrated by this country's inability to engage in a serious discussion about Middle East policy. John Nichols, An Israeli Defense of Jimmy Carter, 1-9-07

Posted by Richard Power at 3:50 AM