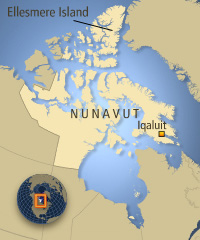 Image: "An ancient ice shelf the size of 11,000 football fields that broke off Ellesmere Island could be dangerous when it starts to drift in the spring, a scientist says...", CBC, 12-28-06

Hard Rain Journal 1-2-07: Climate Crisis Update -- Dire Warnings from the West's Experts and from the Chinese Government; Meanwhile, from US Government -- NOTHING

What happened in the Canadian Arctic over the last week of 2006 was a closing punctuation -- a planetary exclamation mark -- on what was hopefully the pivotal year in our collective understanding. And so, moving on...

In the West, four informed and dire warnings greet you in the Julian calendar New Year, while the world's most powerful economic and military power (oh yes, and the world's biggest emitter of greenhouse gases) does nothing.

Meanwhile, in the East, the Chinese government has issued its first official assessment of global climate change.

The irony is breathtaking.

The world's most totalitarian government is getting its mind around global warming and climate change.

The world's most powerful democracy (or at least the shell of it) won't even acknowledge it as the greatest challenge threatening us all. Incredible.

Here are excerpts from these two important stories, and links to the full texts:

A combination of global warming and the El Niño weather system is set to make 2007 the warmest year on record with far-reaching consequences for the planet, one of Britain's leading climate experts has warned.
As the new year was ushered in with stormy conditions across the UK, the forecast for the next 12 months is of extreme global weather patterns which could bring drought to Indonesia and leave California under a deluge.
The warning, from Professor Phil Jones, director of the Climatic Research Unit at the University of East Anglia, was one of four sobering predictions from senior scientists and forecasters that 2007 will be a crucial year for determining the response to global warming and its effect on humanity....
The warning of the escalating impact of global warming was echoed by Jim Hansen, the American scientist who, in 1988, was one of the first to warn of climate change.
In an interview with The Independent, Dr Hansen predicted that global warming would run out of control and change the planet for ever unless rapid action is taken to reverse the rise in carbon emissions....
His call for action is shared by Sir David King, the Government's chief scientific adviser, who said that 2006 had shown that the "discussion is now over" on whether climate change is happening. Writing in today's Independent, Sir David says progress has been made in the past year but it is "essential" that a global agreement on emissions is struck quickly....
The demands came as the World Meteorological Organisation (WMO), the United Nations agency that deals with climate prediction, issued a warning that El Niño is already established over the tropical Pacific basin. It is set to bring extreme weather across a swath of the planet from the Americas and south-east Asia to the Horn of Africa for at least the first four months of 2007. Cahal Milmo, World faces hottest year ever, as El Niño combines with global warming, Independent, 1-1-07

Temperatures in China will rise significantly in coming decades and water shortages will worsen, state media has reported, citing the government's first national assessment of global climate change.
"Greenhouse gases released due to human activity are leading to ever more serious problems in terms of climate change," the Ministry of Science and Technology said in a statement.
"Global climate change has an impact on the nation's ability to develop further," said the ministry, one of 12 government departments that prepared the report.
In just over a decade, global warming will start to be felt in the world's most populous country, and it will get warmer yet over the next two or three generations....
"The report will serve as the country's scientific and technical reference in policy making and international cooperation," said Li Xueyong, vice minister of the science ministry.
The report notes that China has already started seeing the effects of global warming, the China News Service said.
Glaciers in the nation's northwest have decreased by 21 percent since the 1950s, the report says, according to the news agency.
It also says all China's major rivers have shrunk over the past five decades, although it provides no figures for the actual dechttp://www.blogger.com/img/gl.link.gifrease. Dire Warnings from China's First Climate Change Report, Agence France Presse, 12-27-06

Want to partichttp://www.blogger.com/img/gl.link.gifipate in the effort to mitigate the impact of global warming? Download "Ten Things You Can Do"