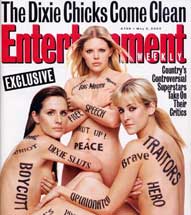 W. Jong-il is preparing to announce his faux "surge" (it is a splurge really, and a shameless political stunt for domestic consumption), which will only lead to more senseless deaths of US military personnel, more slaughtered Iraqis, greater regional chaos, greater isolation for the USA, more war crimes, more defilement of the US Constitution, and greater danger to the US populace.

His Renfields, the shell-of-a-man-formerly-known-as-John-McCain (R-AZ) and Joe Lieberman (I-CT) are out on the air waves shilling it.

How can the US mainstream news media continue to provide center stage to these deluded people?

The new Congress must act decisively to bring this tragedy to an end, and hold the Bush-Cheney national insecurity team accountable for their grevious wrong-doing.

I spoke out against the foolish military adventure in Iraq when it was still little more than a gleam in Dick Cheney's eyes. I said that it would be a Mega-Mogadishu. I said that it was worst than immoral or illegal, it was stupid. Although I am a Democrat (for better and worse), the analysis that led me to my conclusion was not based on politics or ideology, it was based on fundamental security principles and intelligence analysis.

Most of those listed here are (or were) Republicans.

Opposition to the invasion and occupation of Iraq has nothing to do with politics or ideology.

For the sake of the historical timeline and to deliver the context and continuity that the US mainstream news media refuse to provide, I have posted (in reverse chronological order) the views of Gen. George Casey, who leads US forces in Iraq, Senators Richard Lugar (R-OH) and Arlen Specter (R-OH), US Secretary of Defense, Robert Gates, six thousand men and women of the US military as surveyed by the Military Times, the Joint Chiefs of Staff, former Secretary of State Colin Powell, and the Iraq Study Group, which was ironically led by James Baker, who engineered the judicial coup that installed Bush, and included Sandra Day O'Connor, who voted on the side of shame in the split 5-4 Supreme Injustice decision in Bush v. Gore.

All are on the record at least against the splurge that Bush, Cheney, Joe Lieberman (I-CT) and the shell-of-a man-formerly-known-as-John-McCain (R-Z) are going to attempt to force down the throats of US military personnel and their families.

On Dec. 23, an anonymous Defense Department official told the Los Angeles Times that top American military commanders in Iraq, including Gen. George Casey, had “decided to recommend a ’surge’ of fresh American combat forces.”
But in an interview last Friday, Casey told reporters that he still has doubts about an President Bush’s troop escalation plan in Iraq. From today’s New York Times: The longer we in the U.S. forces continue to bear the main burden of Iraq’s security, it lengthens the time that the government of Iraq has to take the hard decisions about reconciliation and dealing with the militias. And the other thing is that they can continue to blame us for all of Iraq’s problems, which are at base their problems. … It’s always been my view that a heavy and sustained American military presence was not going to solve the problems in Iraq over the long term.
Additionally, according to Casey’s spokesman, the general, as of Dec. 23, had “not recommended more troops be sent here.” Contrary To Pentagon Claims, Gen. Casey Still Warning Against Troop Escalation In Iraq

WOLF BLITZER: Can you justify deploying more U.S. troops into what you believe is a civil war?
SEN. ARLEN SPECTER (R-PA): On this day, for the record, Wolf, I would say no.
Specter can’t justify escalation, Think Progress, 12-31-06

Today on Fox News Sunday, Sen. Richard Lugar (R-IN), the outgoing chairman of the Foreign Relations Committee, said President Bush should have congressional support before he announces any plan for escalation in Iraq. “[I]n the past, the administration has been inclined not to disregard Congress but to not take Congress very seriously. I think this time Congress has to be taken seriously.”
If Bush ignores Congress, Lugar said he should expect “a lot of hearings, a lot of study, a lot of criticism,” and “demands for subpoenas.” Fox host Chris Wallace said, “You’re saying this could get ugly.” Lugar: Bush Must Consult Congress Over Escalation Or It ‘Could Get Ugly,’ Think Progress, 12-31-06

It's often written or said in the media that, despite public opposition to the Iraq war here at home, military personnel strongly back President Bush's handling of the conflict. But a poll for the Military Times newspapers, released Friday, shows that more troops disapprove of the president’s handling of the war than approve of it.
It came on the day that at least four more Americans died in the war, pushing the monthly total to 107, the high point for the year -- and the total figure to 2,997, near the milestone of 3,000.
Barely one in three service members approve of the way the president is handling the war, according to the new poll for the four papers (Army Times, Navy Times, Air Force Times and Marine Times). In another startling finding, only 41% now feel it was the right idea to go to war in Iraq in the first place...."The poll has come to be viewed by some as a barometer of the professional career military," the Military Times wrote on Friday. "It is the only independent poll done on an annual basis. The margin of error on this year’s poll is plus or minus 3 percentage points." Poll for Military Papers Finds Troops' Support for War Plunging, Editors and Publishers, 12-29-06

With President Bush leaning toward sending more soldiers to pacify Iraq, his defense secretary is privately opposing the buildup.
According to two administration officials who asked not to be named, Robert Gates expressed his skepticism about a troop surge in Iraq on his first day on the job, December 18, at a Pentagon meeting with civilians who oversee the Air Force, Army, Navy, and Marines. ELI LAKE, Defense Secretary Is Wary of Adding More Iraq Troops, The New York Sun, 12-27-06

The Bush administration is split over the idea of a surge in troops to Iraq, with White House officials aggressively promoting the concept over the unanimous disagreement of the Joint Chiefs of Staff, according to U.S. officials familiar with the intense debate.
Sending 15,000 to 30,000 more troops for a mission of possibly six to eight months is one of the central proposals on the table of the White House policy review to reverse the steady deterioration in Iraq. The option is being discussed as an element in a range of bigger packages, the officials said.
But the Joint Chiefs think the White House, after a month of talks, still does not have a defined mission and is latching on to the surge idea in part because of limited alternatives, despite warnings about the potential disadvantages for the military, said the officials, who spoke on the condition of anonymity because the White House review is not public.
The chiefs have taken a firm stand, the sources say, because they believe the strategy review will be the most important decision on Iraq to be made since the March 2003 invasion. Robin Wright and Peter Baker, White House, Joint Chiefs At Odds on Adding Troops, Washington Post, 12-19-06

The United States is losing the war in Iraq but sending more troops to Baghdad is not the best way to change course, former Secretary of State Colin Powell said on Face The Nation.
Powell said he agreed with the assessment of the Iraq Study Group co-chairmen, Lee Hamilton and James Baker, that the situation in Iraq is "grave and deteriorating," and he also agreed with recently-confirmed Secretary of Defense Robert Gates that the U.S. is not winning the war.
"So if it's grave and deteriorating and we're not winning, we are losing," Powell told Bob Schieffer in an exclusive interview. "We haven't lost. And this is the time, now, to start to put in place the kinds of strategies that will turn this situation around....It is the D.C. police force that guards Washington, D.C., not the troops that are stationed at Fort Myer," Powell said. "And in Baghdad, you need a police force to do that, and in the other cities, you need a police force to do that, and not the American troops." Powell: We Are Losing In Iraq, Exclusive: Former Secretary Of State Says More Troops Are Not The Answer, CBS, 12-17-06

Having read the national bestselling paperback The Iraq Study Group Report, I am not so convinced by much of what I am reading about it from writers on the left. Many progressives have interpreted the document's real message as a call for "Stay the Course Lite" or as a not-so-cloaked argument for privatizing Iraq's massive petroleum reserves. (Of course the centrality of oil in all of this should never be in doubt, but the situation in Iraq has spun out of control in ways that go far beyond privatization schemes. And of course the ISGR is predicated on salvaging US imperial power, redeploying it and rebuilding. Pointing out such things is like "discovering" that the sun again came up in the east.)
Nor are the pundits of the gray center getting it: They seem bogged down in the report's seventy-nine suggestions. Shift US troops to advisory roles? Will Iran come to the table in good faith?
In a strange inverted fashion, I am most compelled by the readings that have emerged from the far right. They understand the document for what it is: an abject admission of total failure. Rush Limbaugh summed it up best when he mocked the document as "The Iraq Surrender Group Report."
Limbaugh is totally correct. That's what it is: a plan for defeat with honor. To put the report in very simple terms, its message is: The United States got its ass kicked, time to go. Or, if you prefer a direct quote: "The ability of the United States to shape outcomes is diminishing. Time is running out." And later they ponder how to "avert catastrophe."
All of the report's suggestions flow from that basic understanding. And though it is written in polite, obfuscating Beltway vernacular, the report offers up a devastating critique of the Bush Administration's Middle East foreign policy. Most provocative, it correctly links Iraq's meltdown to a solution in the Israeli-Palestinian conflict; these days that sort of suggestion is downright subversive. The right-wingers hate this report so passionately because they actually understand what it is saying.
CHRISTIAN PARENTI, ISG: Defeat With Honor, The Nation, 12-18-06