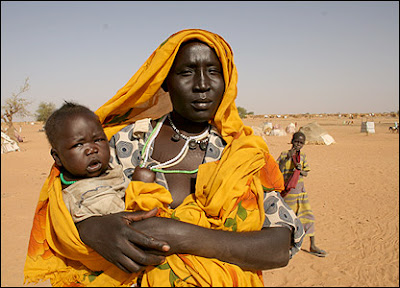 In January, at least 350 more people died, and tens of thousands of more people fled their homes.

No, it isn't getting any better in Darfur. Indeed, it is getting worse.

Meanwhile, the great nations, in particular China and the USA, do as little as possible, and for the worst of reasons.

Lawrence Rossin of Save Darfur sheds some light on the Bush administration's hollow rhetoric:

The forced withdrawal of aid organisations from Darfur could leave more than two million civilians facing catastrophe, vulnerable to militia attacks, starvation and disease, a leading human rights activist has warned. Lawrence Rossin, a former US ambassador now acting as international coordinator of the Save Darfur Coalition, said that even after the deaths of an estimated 400,000 people in the region, most at the hands of the government-backed Janjaweed militia, the situation could still get worse....In his state of the union address on Tuesday, President George Bush said he would "continue to awaken the conscience of the world to save the people of Darfur". But, said Mr Rossin: "We've all raised consciousness about Darfur. That's not the president's job. It's the president's job to do things." Aid chief warns of Sudan catastrophe, Guardian, 1-26-07

And in an open letter to the Chinese government, Human Rights Watch has urged them to do more:

We write regarding your upcoming trip to Sudan. China recently took positive steps to encourage the Government of Sudan to accept a United Nations peacekeeping force in Darfur. Yet consistent with China's international obligations, its aspirations to be seen as a responsible international power, and its claims to be a friend of the Sudanese people, there is a great deal more your government can do on Sudan....
We believe that there are four steps China can take to improve the situation in Sudan.
First, seriously consider the important step of supporting through the UN the imposition of targeted sanctions on key Sudanese officials responsible for Darfur policy....
Second, encourage the Government of Sudan to place a portion of its oil revenues in an internationally administered trust fund for the victims of atrocities...
Third, it is imperative that China establish new mechanisms to monitor the end-use of its weapons....
Fourth, China should examine the connection between Sudanese oil development and human rights abuses....
Finally, we encourage you to issue an overview or white paper on China's policies toward the Sudan over the past decade. Surely you will agree that there is much international confusion regarding China's own actions. It is in everyone's interests, including China's, to have a clear sense of what initiatives China has undertaken.
Undertaking these steps will help demonstrate that China's interest in Sudan is not merely about ensuring its access to oil supplies but also about the welfare of the Sudanese people so devastated by the ongoing conflict. Moreover, it will serve as an important signal to the international community that China takes seriously its obligations to uphold human rights. Letter to China On the Crisis in Darfur, Human Rights Watch, 1-29-07

What the USA and China have not done is worse than a failure of leadership, it is a failure of the inner moral compass upon which leadership is based.

The focus this week is on the African Union summit in Addis Ababa.

United Nations Secretary General Ban Ki-moon says he will put pressure on Sudan to find a solution for the humanitarian crisis in the Darfur region...Mr. Ban said the first phase of a three-phase plan was already nearly completed. Under the plan, several U.N. and African Union military and civilian staff would be sent to Darfur, preparing the ground for at least 10,000 peacekeepers.
UN Secretary General puts pressure on Sudan over Darfur, Malaysia Sun, 1-29-07

Sudan's President Omar al-Bashir has again been bypassed in his bid to become chairman of the African Union because of the conflict in Darfur.
Mr Bashir was due to take on the role but it has instead been given to Ghana's President John Kufuor. Chad had threatened to leave the AU if Mr Bashir became its leader, while Amnesty International warned that the body's credibility would be damaged....African snub to Sudan over Darfur, BBC, 1-29-07

Aid agencies today warned the enormous humanitarian response in Darfur will soon be paralysed unless African and global leaders at the AU Summit take urgent action to end rising violence against civilians and aid workers....
The six agencies warn the Summit will fail unless:
1. African Heads of States led by Chairperson Denis Sassou Ng'uesso and new UN Secretary General Ban Ki-Moon greatly increase the pressure on all parties to the conflict to ensure attacks on civilians and aid workers end immediately, and ensure that perpetrators of violence are held to account.
2. The African Union Commission does more to end the growing violent attacks. The AU's credibility with the people of Darfur is at an all-time low. AU troops in Darfur must immediately try to regain the civilian population's confidence by implementing the following proactive protection measures: · Regular "firewood patrols" accompanying women who collect essential firewood and animal fodder outside the camps. Although previously in place these have now ceased in most locations in Darfur. · A 24/7 presence inside the main camps and towns to ensure safety of civilians · Making more effective use of the Ceasefire Commission to bring violators to account African leaders, Ban Ki-Moon must take action at AU Summit or it could be too late, Peace Journalism,

But, of course, even if the AU overcomes its own trepidation, who will fund all of this?

Again, the responsibility for what is not happening falls on the shirking shoulders of the great nations.