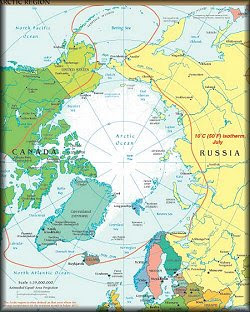 People in the Australian state of Queensland will soon have to start drinking water containing recycled sewage, the state premier has warned. Premier Peter Beattie said he had scrapped a referendum on the issue, because there was no longer a choice. He also warned other Australian states might eventually have to do the same because of mounting water shortages. Water is already recycled in places like Singapore and the UK, but the idea is still unpopular in Australia...."These are ugly decisions, but you either drink water or you die. There's no choice. It's liquid gold, it's a matter of life and death," he said. BBC, 1-29-07

Global warming is the greatest environmental threat that humanity has ever faced....The potential consequences for California are dire. At current rates of warming, state researchers project that the sea level will rise as much as three feet by the end of the century, flooding many low-lying areas and tainting important sources of fresh water like the San Joaquin-Sacramento River Delta. Higher temperatures will drastically shrink the Sierra snowpack that stores much of our water. They will increase smog, boost the risk of wildfires and upset California's vital agricultural industries. San Jose Mercury News Editorial, 12-26-06

From California to Queensland, the reality of global warming looms ever larger and more immediate.

The planetary scope and profound impact of the climate crisis has evolved from an "inconvenient truth" to an unavoidable one.

And the despicable denial and arguably criminal suppression of this truth by the Bush-Cheney regime (and its enablers in the US mainstream news media and political establishment) are finally being investigated.

Meanwhile, the oil and gas industry, which gorges itself on the misery of human beings (e.g., Nigeria), sees this planetary emergency as an opportunity to get to the fossil fuels under the polar ice.

Here is an update on the greatest story of our time.

Rising temperatures will leave millions more people hungry by 2080 and cause critical water shortages in China and Australia, as well as parts of Europe and the United States, according to a new global climate report.
By the end of the century, climate change will bring water scarcity to between 1.1 and 3.2 billion people as temperatures rise by 2 to 3 Celsius (3.6 to 4.8 Fahrenheit)....an additional 200 million to 600 million people across the world would face food shortages in another 70 years, while coastal flooding would hit another 7 million homes... Reuters, 1-30-07

But according to some leading scientists, the upcoming IPCC report, as dire as it is, may be "the sugarcoated version":

Early and changeable drafts of their upcoming authoritative report on climate change foresee smaller sea level rises than were projected in 2001 in the last report. Many top U.S. scientists reject these rosier numbers. Those calculations don't include the recent, and dramatic, melt-off of big ice sheets in two crucial locations... Associated Press, 1-29-07

Now that the control of the House Oversight and Government Reform Committee has passed on to Rep. Henry Waxman (D-CA), the revolutionary nature of the 2006 US mid-term elections is beginning to be felt throughout Beltwayistan:

The new Democratic chairman of a House panel charged today that the Bush administration tried to mislead the public about climate change "by injecting doubt into the science of global warming and minimizing the potential dangers." Rep. Henry Waxman (D-Los Angeles), chairman of the House Oversight and Government Reform Committee, said at the start of a hearing on global warming that he and the committee's ranking Republican, Rep. Tom Davis of Virginia, had repeatedly asked the White House last year for documents to show that senior officials were suppressing scientific reports within the administration about the severity of the problem. Los Angeles Times, 1-30-07

A new report presented to the House Oversight and Government Reform Committee by the Union of Concerned Scientists and the Government Accountability Project shows 435 instances in which the Bush administration interfered into the global warming work of government scientists over the past five years. Some other findings of the survey Think Progress, 1-30-07

Rep. Jim Cooper (D-TN) revealed the Bush administration has barred Director of National Intelligence John Negroponte from saying the phrase “global warming.” Cooper said he recently attended a dinner party at which Negroponte was speaking, and “word slipped through the crowd he was not allowed to utter the words ‘global warming,’ at least not in the same sentence. Apparently, he was allowed to say the word ‘global’ in a separate sentence, and ‘warming’ in a separate sentence, but not together.” Think Progress, 1-30-07

I have no doubt that the Neo-cons and their Corporatist sponsors have gamed out global warming and climate changes, and think in their delusion that they like what they see, depopulation in Asia and Africa, economic ruin in Europe, and oh yes, lots of oil and natural gas bubbling to the surface from under the floating carcasses of polar bears and the shattered remnants of indigenous cultures:

Global warming caused by fossil fuel emissions is rapidly melting the Arctic. Sea ice coverage this past March “was the lowest in winter since measurements by satellite began in the early 1970s,” and NASA-funded U.S. scientists believe in 30-50 years, “summer sea ice will have vanished from almost the entire Arctic region,” conditions not seen in the area in a million years.
For energy companies, this catastrophe means a “new era of oil and natural gas exploration in the region Think Progress, 1-29-07

Hard Rain Journal 12-27-06: Climate Crisis Update -- Lohachara is Gone, the Bears in Spain are Not Hibernating, Wall Street Wonders What It All Means