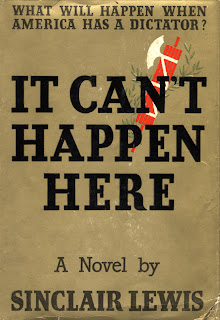 On just one day, in honor of the 234th anniversary of the Boston Tea Party, the new American revolutionaries brought in $6.04 million, another one-day record. The average donation was $102; we had 58,407 individual contributors, of whom an astounding 24,915 were first-time donors. And it was an entirely voluntary, self-organized, decentralized, independent effort on the internet. Rep. Ron Paul, 12-17-07

I disagree with almost everything Rep. Ron Paul stands for, and yet, I feel it is vital to acknowledge what he is doing and urge him on in his struggle -- because what I do agree with Rep. Paul on is the most important issue of all: the rise of fascism in the USA. Indeed, it has become a truly bi-partisan concern, and that is an encouraging sign of health in the body politic. (See also Randi Rhodes Interviews Naomi Wolf -- "... the conclusion is to rise up, and to understand that we have very little time.") -- Richard Power

A new campaign ad from Republican presidential contender Mike Huckabee sounds a lot like a literary prediction about the coming of fascism, according to fellow GOP Oval Office seeker Rep. Ron Paul (R-TX).
Huckabee's ad, a Christmas message referencing the "celebration of the birth of Christ," depicts the former Arkansas governor in front of a window frame or bookshelf that appears to resemble a cross.
Asked by Fox and Friends host Steve Doocy what he thought of the TV spot, Paul minced no words.
"Well, I haven't thought about it completely, but you know, it reminds me of what Sinclair Lewis once said," Paul responded. "He says, 'When fascism comes to this country, it will be wrapped in the flag carrying a cross." Raw Story, 12-18-07