Darfur Crisis Update: Does Cronyism Trump Conscience Even in A Case of Genocide? Why Hasn't Bush Signed SADA? Where is the Outcry? 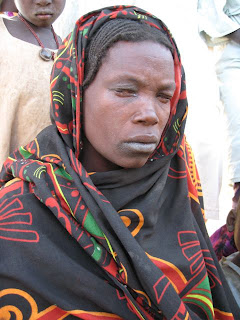 The peace negotiations are not advancing.

The peacekeeping mission is under-staffed, inadequately equipped and behind schedule.

The inaction of the great nations has revealed the hypocrisy of their leaders' rhetoric.

Meanwhile, thanks to the tireless work of humanitarian activists like Mia Farrow, there has been meaningful action in Beltwayistan --

In mid-December, both the US Senate and the US House of Representatives passed the Sudan Divestment and Accountability Act (SADA) -- unnamiously.

SADA would authorize and provide legal protection for state and local governments to divest and would prohibit problematic companies in Sudan from receiving federal contracts.

An yet, as of this moment, it still languishes on the desk of George W. Bush.

If it is to make a difference in 2008, it must be signed in this next couple of days.

Farrow is urging those of us who want to end the genocide in Darfur to take the following two steps:

Tell the staff person who answers the phone that you are urging the President to sign the Sudan Accountability and Divestment Act and take all steps necessary to implement it.

Do not let business as usual for crony contractors, etc.m determine whether or not your government takes a stand and sends a clear message on this crime against humanity.

Of course, it is a disgrace tha the UN-AU peacekeeping mission does not have the soldiers or helipcopters it needs to get the job done; and the sad fact that it doesn't is a damning revelation about the collective conscience of the West.

But signing SADA into law now requires no more than one signature.

What is the delay?

Here are brief excerpts from a news story on the status of the negotiations and the peacekeeping force and an op-ed piece on SADA, with links to the full texts:

Diplomatic wrangling dashed hopes for an end to the killing and rape in Darfur this year and a new UN-backed peacekeeping mission scheduled to start on January 1 faces an uphill struggle.
UN Darfur envoy Jan Eliasson and his African Union counterpart Salim Ahmed Salim have had scant success trying to revive and broaden a peace deal reached last year between the Khartoum government and rebel groups in the strife-torn region of western Sudan. ... But the two envoys have vowed to keep pushing for a political solution despite the fragmentation of rebel groups and the continuing violence. ...
The deployment of the force, known as UNAMID, is running several months behind schedule and its prospects of success are in peril because of a lack of equipment, UN Secretary General Ban Ki-moon has warned.
Only a third of its eventual strength is likely to be in place on time when the mandate starts on January 1, according to its commander General Martin Luther Agwai.
The best-case scenario would see 9,000 personnel on the ground on January 1, but that will include the 6,200 AU troops already in Darfur, he said. Agence France Press, 12-27-07

"Not on my watch."
In September 2001 President Bush scrawled these now famous words on the margins of a presidential briefing highlighting the Clinton administration's failure to respond to the genocide in Rwanda. The United States -- along with its European allies -- failed to lift a finger as more than 800,000 people died in less than 100 days.
Three years after pledging not to repeat Clinton's mistakes, President Bush declared that genocide was occurring in the Darfur region of Sudan, the first time a sitting U.S. president had labeled an ongoing conflict as genocide. ...
Considering Bush's leadership, the dire situation on the ground, and the vulnerability of the Sudanese government to economic pressure, Americans concerned about Darfur were shocked when the president publicly opposed the most robust piece of Darfur legislation to come out of Congress, the Sudan Accountability and Divestment Act.
The legislation, which was approved unanimously this month by both chambers of Congress, would authorize and provide legal protection for state and local governments to divest and would prohibit problematic companies in Sudan from receiving federal contracts. Adam Sterling and Sam Bell, Ft. Worth Telegraph, 12-24-07