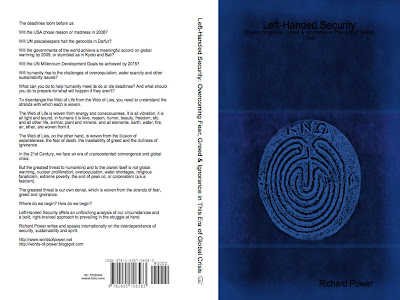 I launched Words of Power in 2005 to highlight the interdependence of security, sustainability, and spirituality in the 21st Century and to influence public discourse on these vital issues.

In the course of the last two years, I have posted hundreds of Crisis Updates and Hard Rain Journal entries.

Words of Power has become a force in the marketplace of ideas.

My latest book, Left-Handed Security: Overcoming Fear, Greed & Ignorance in This Era of Global Crisis (978-1-4357-0658-3) is an effort to further articulate this new vision of interdependent security and sustainability rooted in an inclusive, planetary spirituality and to underscore the urgency of acting upon it.

The planet as a whole and the USA, in particular, is entering a do or die period.

The deadlines loom before us:

Will the USA choose reason or madness in 2008?

Will UN peacekeepers halt the genocide in Darfur?

Will the governments of the world achieve a meaningful accord on global warming by 2009, or stumble again as in Kyoto and Bali?

Will humanity rise to the challenges of overpopulation, water scarcity, and other sustainability issues?

In the 21st Century, we face an era of unprecedented risk convergence and global crisis.

But the greatest threat to humankind, and to the planet itself, is not global warming, nuclear proliferation, overpopulation, water shortages, religious fanaticism, extreme poverty, the end of peak oil, or fascism (what Mussolini aptly termed "corporatism").

The greatest threat is our own denial, woven as it is from strands of fear, greed, and ignorance.

Left-Handed Security offers an unflinching analysis of our circumstances and a bold, right-brained approach to overcoming the challenges that confront us.

Left-Handed Security is over 500 pages long, includes over 90 illustrations, and is available in paperback or downloadable .pdf versions. Click here for more information, or to purchase copies.

I have published it myself via Lulu.com to maintain complete control of the content and the framing of it.

Although it will soon be available via Amazon and Barnes and Noble, if you are interested in obtaining a copy, I encourage you to purchase it directly from Lulu.com. It is available via Lulu now, and purchasing it through Lulu best furthers my work.

Left-Handed Security is one of three books I have written over the last two years, the other two, Lost Teachings of Lama Govinda, ISBN 978-0-8356-0854-, published by Quest Books, and Secrets Stolen. Fortunes Lost: Preventing Economic Espionage & Intellectual Property Theft in the 21st Century, ISBN-13 978-1-59749-255-3, co-authored by Christopher Burgess and published by Elsevier, are available via Amazon and Barnes and Noble.