Image: During the storming of the White House, home of Russia's legislature, soldiers from the elite "Alpha" unit are sent in to conduct negotiations. Vladimir Filonov, 10/4/93. Library of Congress 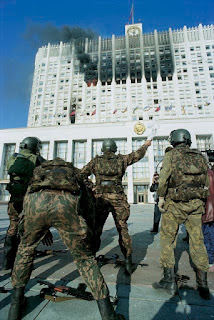 It's gotten so bad that an increasingly Stalinistic Vladimir Putin has started accusing us of provoking an "arms race" and conducting "imperialism" in global affairs. In response to Bush's insistence on creating a missile defense shield, Russia has begun testing "a new ballistic missile capable of carrying multiple nuclear warheads. Buzzflash News Analysis, 6-1-07

The USA could have engaged the new Russia, and bound it to the West in mutual self-interest. But the USA has lost all its good will, credibility and moral authority in the world. It squandered it all in the Mega-Mogadishu of Iraq.

Meanwhile, Putin has outplayed Cheney on the chess-board of Central Asis, and Russia's position in the 21st Century "Great Game" has grown stronger. Russia's young democratic institutions have been undermined. Some leading journalists and dissidents have been assassinated. The bloody conflict in Chechnya grinds on. The Russian Mafiya has become a global security threat.

Instead of offering a second Marshall Plan for the collapsed economies of the East, we prescribed laissez-faire capitalism -- with all its self-destructive, short-sighted excesses; instead of finding common ground to lay out a global security framework, we are positioning missiles on their Western border and military bases on their southern flank.

I have walked the streets of Moscow, Budapest, Sofia and Talinn at night. I have briefed business executives and security and intelligence professionals in the East. I have seen the danger in the promise and the beauty in the darkness. I have felt it with my own heart.

Three recent stories highlight under-reported elements of the troubles brewing in the East:

One concerns an extraordinary environmental security (and yes, terrorism) threat in Northern Europe: "Research now indicates that the enormous tanks holding discarded submarine fuel rods in the Andreeva Bay may explode at any time, creating a nuclear nightmare for Northern Europe." (Afterposten, 6-1-07).

Another concerns the increasing vulnerability of children in Russia: "A great number of children in the Russian Federation remain highly vulnerable. ... Just 34 percent of children are breastfed for the first six months, 66 percent of the population are at risk of having their physical and mental capacity compromised by iodine deficiency, and 40 percent of adolescent males consume alcohol in excess." (Inter Press Service, 5-31-07)

A third concerns the psychological stresses resulting from economic insecurity, and how it is leading the youth of Eastern Europe into the neo-nazi movement: "Since 1991, more than two-thirds of all those who have left Eastern Germany have been women ... the young men who stay behind are often poorly educated, unemployed and frustrated -- perfect fodder for neo-Nazi groups looking for members." (Der Spiegal, 5-31-07)

Research now indicates that the enormous tanks holding discarded submarine fuel rods in the Andreeva Bay may explode at any time, creating a nuclear nightmare for Northern Europe. ... A new report from Rosatom, the Russian government's highest nuclear authority, shows that there is a grave danger that the stockpile can explode. For Norway the consequences could exceed the fallout from the Chernobyl disaster in 1986, and no one knows how imminent the danger is - if it is a question of years - or hours. ...
In 1982/83 radioactive contamination began to leak from used fuel rods from the nuclear submarine reactors. These were stored in flimsy warehouses in the old navy installation at Andreeva Bay. Three large cement tanks became a hurried solution, housing a series of large metal pipes encased in concrete. The rods were carefully placed in these pipes.
This measure was intended as a provisional solution for four to five years, but nothing has happened since. ...
The large tanks, each containing 21,000 rods, are near the sea. Salt water has entered the tanks and lead to the rapid disintegration of the metal pipes. The salt water has then entered the pipes, breaking down the rods, releasing small uranium particles that fall to the bottom of the metal pipes.
"The conclusion of Rosatom is that when the amount of particles on the bottom reaches five to ten percent in relation to the amount of water, potentially explosive critical mass will occur," Kudrik said.
Nikitin has had a prison term and a five year battle to be totally cleared of espionage charges by the Russian Supreme Court as his price for compiling Bellona's first report on radioactive contamination at Kola. Kola "a nuclear bomb," Aftenposten, 6-1-07

IPS: What, in your assessment, are the most pressing issues affecting Russia's children today?
CAREL DE ROOY [UNICEF Representative in Russia and Belarus]: A great number of children in the Russian Federation remain highly vulnerable.
The UNICEF Child Poverty study conducted in 2005 shows that families with children make up the biggest group among the poor... Extreme levels of risk and depth of poverty are characteristic of large families. Single-parent families are also a vulnerable group. At the same time, even the birth of a second child in a (family with two parents) increases the risk of poverty to 50 percent.
IPS: How deep is the children's crisis now?
CR: Just 34 percent of children are breastfed for the first six months, 66 percent of the population are at risk of having their physical and mental capacity compromised by iodine deficiency, and 40 percent of adolescent males consume alcohol in excess.
Almost 100 new cases of HIV are registered every day, with 43 percent of all newly registered HIV cases being women of childbearing age. While Russia's infant, child and maternal ratios are gradually declining, life expectancy and fertility rates are also declining.
Particularly alarming is that the life expectancy of Russian men at age 30 has shown no change since World War II, despite significant achievements in modern medicine during this time. Greater attention to preventive health is required, complementing high-cost curative measures with low-cost, high-impact preventive measures.
UNICEF supports projects aimed at HIV prevention, prevention of iodine deficiency, and promotes healthy lifestyles through "youth friendly clinics" and information centres. It also promotes breastfeeding through a "baby-friendly hospitals" initiative. Russia's Children Remain "Highly Vulnerable," Interview with UNICEF's Carel de Rooy, Inter Press Service, 5-31-07

The problem has been well known for years: Ever since the mid-1990s, young Eastern Germans have been fleeing the region due to a lack of economic opportunity, hoping to find jobs in the western part of the country. Some 1.5 million have already left the region -- roughly 10 percent of the population of East Germany when the Berlin Wall fell. Even worse, most of those who leave are under 35 and many of them have above average education or training.
But according to a new study released by the Berlin Institute for Population and Development, there is another problem that accompanies the migration. Since 1991, more than two-thirds of all those who have left Eastern Germany have been women. The result is that in many towns in the region, there are simply not enough to go around -- some places are missing up to 25 percent of their young women. Even worse, the young men who stay behind are often poorly educated, unemployed and frustrated -- perfect fodder for neo-Nazi groups looking for members.
"In general," the study finds, "right-wing radical parties receive more votes in those areas where the most young women have left." .. "In those regions where the economic problems are largest, a new, male-dominated underclass has developed, the members of which are excluded from participation in large parts of the society," the study finds. "Many of them have no job, no education and no partner. It is exactly these difficult conditions that make it more difficult to slow the negative demographic trend or even to reverse it." SHE GOES WEST, HE GOES RIGHT: Lack of Women in Eastern Germany Feeds Neo-Nazis. Der Spiegel, 5-31-07