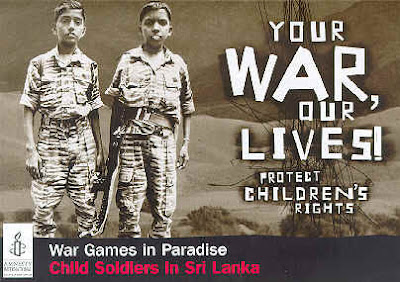 The Special Court for Sierra Leone has established an historic precedent by declaring Alex Tamba Brima, Brima Bazzy Kamara and Santigie Borbor Kanu guilty of, among other crimes, enlisting children under the age of 15 as child soldiers in Sierra Leone's 11 year civil war. This is the first time an international criminal tribunal has successfully prosecuted individuals for the recruitment and use of children as soldiers.

Commonly cited statistics indicate that there are several hundred thousand child soldiers in the world at any one time.

Although probably understated, such guestimates are reasonable in regard to the number of child soldiers compelled into armed conflict between, or within, states (or would be states) around the world.

However, those commonly cited statistics are grossly misleading in another regard -- they ignore the hundreds of thousands, if not millions, of youths compelled, or lured, into gangs in the streets of the world's ghettoes, including, and especially, the mean streets of the USA's major metropolitan areas, and increasingly, their surrounding suburbs. Gangstas = Child Soldiers.

Do you remember Warren Beatty's brilliant 1998 film, Bulworth? In the midst of a spiritual awakening disguised as a nervous breakdown, Senator Jay Billington Bulworth (D-CA) finds himself in an L.A. ghetto, watching young child soldiers at work for the neighborhood drug dealer.

Bulworth turns away from suicide-by-contract-killing, and seeks redemption by rapping truth to power instead. He confronts the political establishment, the mainstream news media and the K Street lobbyists. In the end, Bulworth is assassinated.

Only one viable 2008 presidential candidate has been speaking out on the spiritual, economic, social and psychological costs of poverty in America, John Edwards. Consequently, most Americans know the price of his haircuts. And conveniently, the punditocracy thinks it unlikely he will win the nomination because of how much more corporate money has flowed into the coffers of Sens. Clinton and Obama. Now why would that be?

The problem isn't something that just exists far away in Africa, Asia and Latin America, it probably exists within a twenty to forty minute ride from your home.

In Africa, Asia and Latin America, the exploitation of children as soldiers is undertaken by those willing to meet the industrialized world's demand for natural resources -- e.g., diamonds, oil, coffee and cocoa -- at any cost.

In the USA, it is undertaken by those who traffic in heroin, cocaine, weapons, and yes, even music; and it is a by-product of racism, predatory capitalism and the economic warfare against the middle class.

The uprisings of 1965 (Watts) and 1992 (South Central) came out of nowhere, seemingly. Well, after the last seven years, we are closer to nowhere than we have even been.

While applauding the Court's verdict, and acknowledging its significance, the Child Soldiers Coalition (CSC) emphasizes how much more work there is ahead of us:

Those children who were the victims of enlistment and use, many of whom are now young adults, urgently need support. In its final report completed in 2004, the Sierra Leone Truth and Reconciliation Commission specifically recognized that forcibly recruited children were among those who still suffer the consequences of the war and recommended specific reparative measures for them.
The Coalition calls upon the Sierra Leone authorities, with the support of donors, to provide effective remedies to former child soldiers to ensure that their suffering is fully acknowledged and that they are provided with appropriate support and assistance. This must include restitution, compensation, rehabilitation, satisfaction and guarantees of non-repetition. It should also include psychosocial support and education, training, employment and other programs to facilitate their meaningful participation in society. Such assistance should be offered in the context of broader programs to help all war-affected children. ...
"The Special Court has set some important precedents and contributed significantly towards delivering justice to the countless victims of the civil war," said Dee Brillenburg Wurth, West Africa Project Manager to the Coalition. "However, the narrow interpretation by the Prosecutor on the 'greatest responsibility' standard applied along with the amnesty provision contained in the Lomé Peace Agreement means that many other suspects, including those who recruited and used children - will remain at large," she added.
The Coalition reminds the Sierra Leone government that it has the duty to investigate and, if there is sufficient admissible evidence, to prosecute before national courts persons suspected of enlisting or conscripting children and, if found guilty, the duty to punish them. Child Soldiers Coalition via Relief Web

For more on the domestic US dimension of this problem, drive across town.