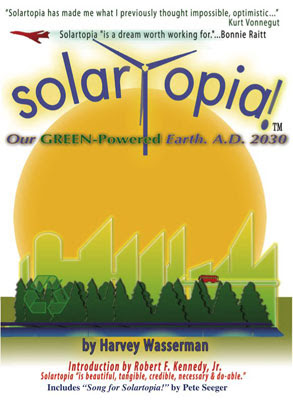 The people who are in power represent what I call the King CONG interests – i.e., Coal, Oil, Nukes and Gas (CONG) and if it weren’t for stolen elections we would have had solar power a long time ago. We would have had a Solartopia. Renewable energy can do it all. It can run our society, and it needs to run our society. Harvey Wasserman on Air America, 5-30-07

In auditoriums from the Left Coast to Beltwayistan, and in conversations with talk show hosts from Larry King to Jon Stewart, Al Gore, leader of the resistance, is marshalling patriots to repulse the final Assault on Reason. Yes, it’s Gore’s book that should be at the top of your list, but I suggest you place Harvey Wasserman’s Solartopia: Our Green Powered Earth AD 2030 (www.solartopia.org) right behind it. Solartopia is written with wit, boldness and contagious optimism. It also has the imprimatur of a foreword by Robert F. Kennedy, Jr., another hero of the resistance.

Like the Goracle himself, Air America Radio is an extraordinary resource and a powerful force for accelerated evolutionary change in the US body politic. And Air America’s Thom Hartmann is one of the progressive movement’s most important analysts as well as one of its most effective communicators. In this wonderful interview, Hartmann engages in a dialogue with Wasserman, who has also played a vital role over the last seven years, as the editor of the Free Press, and especially in regard to the theft of the 2004 election.

As with Hard Rain Journal 4-1-07: Hartmann & Gelbspan Debunk the Swindle that is "The Great Global Warming Swindle", I have transcribed the Hartmann-Wasserman dialogue from the Thom Hartmann Show on 5-30-07 and posted it here to encourage you to tune into Thom on the air waves or over the Internet, and to buy Solartopia not only for your own reading, but to pass on to your friends, family and colleagues.
`
– Richard Power

Thom Hartmann: Harvey Wasserman, editor of the Free Press, has a new book out, its called Solartopia: Our Green Powered Earth AD 2030. Harvey has done some great work, for example, on the theft of the 2004 election in Ohio. Harvey, this is quite a different direction from election fraud.

Harvey Wasserman: Well, actually not really. The people who are in power represent what I call the King CONG interests – i.e., Coal, Oil, Nukes and Gas (CONG) and if it weren’t for stolen elections we would have had solar power a long time ago. We would have had a Solartopia. Renewable energy can do it all. It can run our society, and it needs to run our society.

Hartmann: And, in fact, arguably solar energy does run our society. It was solar energy collected 300 million years ago by plants and stored in the ground and we are now re-liberating it.

Wasserman: Yes, and it needs to stay there; although the worst piece of it is the nuclear piece. You have these psychotics and lunatics talking about building new nuclear plants. Why don’t you just hand Osama Bin Laden some nuclear weapons.

Hartmann: They already have. Mohammed Atta -- and this first came out in the 9/11 Commission Report -- first planned, instead of hitting the World Trade Center, to hit the Indian Point nuclear plant because there is a cooling pond outside where they’ve got years and years of nuclear waste stored and if you dove a fully loaded jet liner into that thing it would render a one hundred square mile area, which would include New York City, for a quarter of a million years. He finally dismissed that idea as impractical because he concluded that it being so dangerous there had to be surface to air missiles around Indian Point nuclear power plant and in fact to this day there aren’t

Wasserman: He was wrong. There is absolutely no way to protect a nuclear power plant from a terrorist attack. It cannot be done. And had he, God forbid, hit Indian Point instead of the World Trade Center, we wouldn’t be talking about 3,000 people dead, we would probably be talking about 300,000 people dead, and another three million with ongoing cancers. The United States would never economically recover. We actually dodged the bullet.

Hartmann: And it is not as if you and I are now giving terrorists information they don’t already have. The New York Times and all the mainstream news media reported it, and it was the 9/11 Commission that said he had considered it and then set it aside …

Wasserman: … These people are talking about building new nuclear powers, and they are shredding our constitution to protect us from terrorists. They are giving them pre-deployed weapons of nuclear mass destruction.

Hartmann: What I like so much about your book new book Solartopia: Our Green Powered Earth AD 2030 is that unlike so many of the books about solar power and solar energy out there that simply deal with the technology and the kind of wonky aspect of it (though there is some dimension of that in your book), you also deal with the politics of it, and the politics of why since the time when Jimmy Carter said he was going to have this nation’s first solar bank, providing 20% of our electricity by the year 2000, and then Reagan came in and stopped it, the politics of the last twenty-six years that have prevented it from happening.

Wasserman: Yes. And the reality is if we went to Solartopia now, and did nothing but build solar power, we would have an economic boom that would match the Internet/PC boom of the last quarter century. There are trillions of dollars to be made in alternative energy. That’s the bottom line. That’s why I am so optimistic. Everybody wonders how I can be so optimistic, aside from the fact that it is genetic, I have looked at the numbers. To get to Solartopia, all you have to do is look at the numbers, and you see what really is cheap, and what works, and its all green energy. That’s the reality.

Hartmann: Here is in fact Jimmy Carter on this topic –

US President Jimmy Carter (recording): I will soon submit legislation to Congress calling for the creation of this nation’s first solar bank, which will help us achieve the crucial goal of 20% of our energy coming from solar power by the year 2000.

Hartmann: Now if we had done that we would not be importing oil from the Middle East. Why did that not happen?

Wasserman: Because Ronald Reagan came in the White House. We had working solar water heating panels on the roof of the White House. Those panels worked, they were energy-savers -- nothing wrong with them. But Ronald Reagan came in and ripped them out. No explanation. Pitched them into some warehouse. Talk about a Luddite! In the 1980s, we had tens of thousands of people working in the solar energy industry, and Reagan just came in, on behalf of the Coal, Oil, Nuclear and Gas industries and tore it all apart. And that’s why we are in Iraq.

Hartmann: One of the things that concerns me most is that now there is a major campaign by the coal industry in the United States to convince us that coal can be converted into a liquid fuel (which is accurate). The Nazis created gasoline out of coal, because they had a lot of coal and no oil. We have a couple of centuries’ worth of coal still in the ground here in the United States. But doing so without the technology to sequester the carbon emitted from it is going to be devastating in terms of global warming. How do you promote solar energy in an environment where you have an industry worth hundreds of billion of dollars, arguably a trillion dollar industry in terms of its net worth world-wide, that is laying out massive advertising campaigns. And not just advertising campaigns with the ability to persuade the public, advertising campaigns with the ability to persuade the media on which they are advertising so that the media does not do any investigative reporting revealing what is going on with this industry and that maybe they should do some fluff pieces about how wonderful the industry is. After all, the media is getting millions of dollars in ad revenues from them.

Wasserman: Coal sequestration – even if it could be done -- is not economical. There is really no reason to mine coal at this point in time, because solar, wind, bio-fuels and geo-thermal are all much cheaper, much more efficient and much more job-producing. Solartopia is an economic vision; it is not a Utopian vision at all. The big barrier is the structure of the corporation. And you have written tremendously about this, in fact, you are one of my initial sources. The structures of the corporate charters in our country allow corporations to have human rights, but not human responsibilities. So these companies are selling this ridiculous, obsolete … I call them the 20th Century Pox – coal, oil, nukes and gas. They are obsolete, they don’t work, and they are not economical. They are standing in the way of perhaps the greatest post-industrial revolution that we have ever known, and that’s the solartopian revolution. I think we will get through it because our survival depends on it, We do have a survival instinct. Aside from the crashing economy, we will not be able to live on this planet if they keep burning coal and building nuclear plants. That’s the bottom line. That’s why it will be done by 2030. That’s as far as I see the carrying capacity of our earth in this paradigm.

Hartmann: We are seeing new reports now that we have fewer than 10 years before we hit a tipping point where global warming flips over into a positive feedback loop, and at that point there will be nothing we can do.

Wasserman: We are going to have to find it -- because people do have a survival instinct. The dumbest thing we can do is building more nuclear power plants – that’s completely insane. When I hear someone talking about that I look for the people in the white coats

Hartmann: Helen Caldicot points out that a nuclear power plant doesn’t start producing its first actual wad of nuclear electricity for twelve to fifteen years because it takes that long to pay back all of the fossil fuels that go into building the thing, mining the uranium, transporting the uranium, etc. ... It is almost a pass through.

EDITOR’S NOTE: Although Wasserman, Hartmann and Caldicott are vehemently opposed to nuclear power, the renown author of GAIA, James Lovelock, insists that nuclear power has to be relied on heavily if civilization is to continue. Others, like Gore, say that nuclear power has to play a role, albeit hopefully limited. For more insight into this debate, read Climate Crisis Update -- Global Warming & The Nuclear Option, A Convergence of National Security Issues