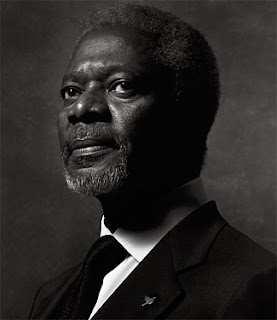 “Africa is the only region where overall food security and livelihoods are deteriorating," Annan said. "We will reverse this trend by working to create an environmentally sustainable, uniquely African Green Revolution. When our poorest farmers finally prosper, all of Africa will benefit.” -- Kofi Annan, 6-14-07

Words of Power is focused on the interpenetrating issues of security, sustainability and spirit. Former UN Secretary-General Kofi Annan is one of those who understand this nexus. It is encouraging to hear that he has taken up new responsibilties as the first Chairman of the Alliance for a Green Revolution in Africa.

The Alliance for the Green Revolution in Africa, headquartered in Nairobi, Kenya, was established in 2006 with an initial US$150 million grant from the Bill & Melinda Gates Foundation and the Rockefeller Foundation. The goal of the Alliance is to help millions of small-scale farmers and their families across Africa to lift themselves and their families out of poverty and hunger through sustainable increases in farm productivity and incomes. -- Richard Power

I do this because, for me, there is nothing more important. We must address poverty at its core. In Africa, this means enabling small-scale farmers to grow and sell Africa’s food. Our goal is to dramatically increase the productivity, food security, incomes and livelihoods of small-scale farmers, many of whom are women.
All of us yearn for practical solutions to address the major cause of our continental poverty—an agricultural sector that has languished, but is now poised to be so much more productive and dynamic. We know that the path to prosperity in Africa begins at the fields of African farmers who, unlike farmers almost anywhere else, do not produce enough food to nourish our families, communities, or the populations of our growing African cities.
The facts are well known. Sub-Saharan Africa is the only region in the world where per capita food production has steadily declined. One-third of the continent’s population is chronically undernourished. Most of our farmers lack access to productive crop varieties, adequate water resources and soil nutrients. In fact, our soils are the most depleted in the world. Good roads are scarce. Universities, and the research and talent they produce, are poorly staffed and under-funded.
We face many challenges. But, through this Alliance, we have reason for hope. But hope must be more than a dream—it requires the mobilisation of knowledge, capacity and resources to end the human misery that ravages our continent.
Many of our leaders have spoken about what is involved in launching a uniquely African Green Revolution—a revolution that looks to improved agricultural production as the basis of a larger effort to take Africa confidently into a new era of sustainable development; a revolution that improves the lives of farmers and delivers greater opportunity, enterprise and prosperity.
Such a vitalisation of African agriculture involves an ambitious agenda, and the Alliance has such an agenda. Eager for results, the Alliance has begun implementing its first programmes:
In 2006, we began working with our partners to develop new seeds for small-scale farmers that are more productive and resilient varieties of Africa’s major food crops.
Also in 2006, we launched educational programmes to accelerate the development of African agricultural expertise, and to monitor and evaluate our work.
Over the next four years, we will systematically build on these programmes, adding initiatives to address other key aspects of the agricultural value chain.
In 2007, we will launch a programme to improve the health of Africa’s soils, now the most depleted in the world.
In 2008, we will launch a water management initiative to help Africa’s small-scale farmers get the most “crop for each drop”.
By 2009, we will address the key challenges facing off-farm systems and markets, such as improvements in market information systems, crop storage, processing, and transport.
Along with all of this work, the Alliance will strongly advocate for policies that support small-scale farmers; those that promote rural development, environmental sustainability, and trade favourable to poor farmers in Africa.
Only with advocacy and policy change at national, regional, and global levels will small-scale farmers succeed in dramatically increasing yields, ending poverty and hunger, and lifting the economies of Africa. ...