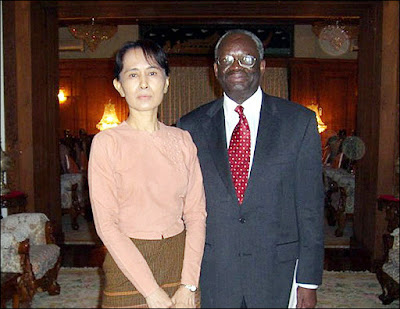 Sustainability and human rights are interdependent. You cannot have one without the other. Burma, at this moment, is a hell realm, in which a dictatorship is flaunting its contempt for both.

The people are being tortured and the forests are being destroyed. And this evil is being underwritten by corporate interests from around the world, in particular China, Inc. and Chevron.

Knowing what you know about Chinese complicity in Burma (and Darfur), will you allow the Olympics to be held in Beijing without a high-profile boycott?

Knowing what you know about Chevron's complicity, will you ever fill up at a Chevron pump again?

Here are two stories, one on the torture and murder of dissidents and monks, the other on deforestation, that offer damning evidence against both the Burmese thugocracy and those who refuse to confront it:

Members of the 88 Generation Students and other detainees who have been arrested by authorities are now being tortured in Insein interrogation center and other detention facilities.
Some have been tortured to death and others have been hospitalized in serious condition, according to sources. ...
Also, hundreds of detained Buddhist monks in Myitkyina in Kachin State in upper Burma are also reportedly being tortured in detention centers. One monk has died, according to one human rights group. Last month, more than 200 monks in Myitkyina and Bamaw townships in Kachin State were arrested in nighttime raids.
Meanwhile, a human rights group reported on Wednesday that Win Shwe, a 42-year-old member of Burma’s main opposition party, the National League for Democracy, died in a police interrogation center after being tortured. He was a member of the party’s Kyaukpadaung Township branch in Mandalay Division, said the Thailand-based Assistance Association for Political Prisoners (Burma). 88 Generation Students, Other Detainees Tortured in Interrogation Centers, Irrawaddy, 10-11-07

Each year caravans of Chinese trucks haul tens of thousands of tonnes of Myanmar's tropical trees to China, the world's largest importer of rare timber and a wood manufacturing centre.
"Six of ten timber logs chopped in the world's forest are destined for China," said Tamara Stark, a forestry expert for Greenpeace in China, a rapacious pace many fear will soon leave much of Southeast Asia treeless.
After 10 years of intense harvesting, Myanmar's forests have disappeared to such an extent that Chinese loggers from Yunnan province are now struggling to find accessible swathes of forest to cut.
"Only a few years ago loggers could travel a couple of days, now they have to travel a least a week into Myanmar to find the forests," said Yang Minggao, general manager of Rongmao Wood Trading Company in nearby Ruili. ....
The insatiable appetite means many of Asia's ancient forests face imminent extinction, and, with it, the demise of hundreds of forest-dependent plant and animal species, environmental groups say. Chinese loggers stripping Myanmar's ancient forests, Agence France Press, 10-11-07