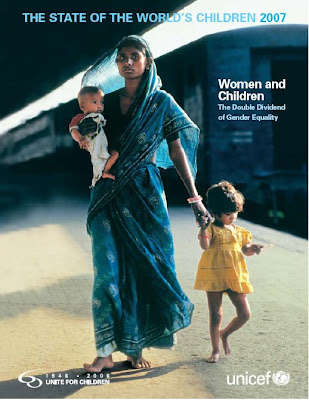 Women are seen as the key for ending global poverty and the issue of gender equality is receiving special attention at events marking the International Day for the Eradication of Poverty ... One of the largest is the International Women's Tribunals on Poverty, which will highlight the feminisation of poverty.
There will be four major tribunals this week presenting testimony on the worsening conditions of women worldwide, and discussing strategies to tackle the root causes at the political and economic level. They will take place at the United Nations in New York, in Cairo, Egypt, Lima, Peru, and in Delhi, India. Anita Petry, The Missing Piece of the Poverty Puzzle, 3-2-07

Welcome to the International Day for the Eradication of Poverty.

Over the past several years, three great, global tragedies -- the genocide against the people of Darfur, the foolish military adventure in Iraq, and the failure to mobilize and marshal a planetary response to the climate crisis -- have rightfully dominated much of the thinking of those of us who live in the real world, and whose hearts are open to the oneness of all life.

But there is a fourth great, global tragedy -- a quiet one, that has been with us for a very long time, but is being aggravated and exposed in this era of unchecked, world-wide "voodoo economics," and that quiet tragedy is the abject poverty in which most of the human race languishes.

The UN Millennium Development Goals (MDG) constitute a powerful alchemical formula, which offers a way to make gold out of that misery.

Just as we have frittered away seven years in the struggle against global warming and the resultant climate change, we have also frittered away half the time allotted to achieve the MDG, and halve extreme poverty by 2015.

If the great nations, and the business interests that they shield, made a serious commitment of political will, spiritual vision and resources (both human and financial) to achieve and surpass the MDG, they could transform life on the planet.

And they could do it at a fraction of the cost of their military budgets.

After all, those military budgets will only succeed, at best, in cheating fate for another few decades; realization of the MDG would go a long way toward delivering the world from war all together.

The secret ingredient is the power of the feminine.

When you raise women up, defend them against violence and oppression, and put them in power, you not only correct a psychological and spiritual imbalance in the human psyche, you strike a heavy blow against poverty.

Chris Grumm, president of the San-Francisco-based Women's Funding Network, which has teamed up with the United Nations Development Fund for Women [UNIFEM] to spearhead the project, says that "women are a huge part of the economic engine, but often not an equal part of economic opportunities."
UNIFEM and the Women's Funding Network are running on Oct. 17 online campaign, featuring an e-card that they are asking people to distribute as widely as possible, to feed into the worldwide Stand Up tally for the Guinness world record. Organizers will also be tallying the online results for themselves so that they can later leverage the total to raise the volume of women's voices within the wider antipoverty movement.
"All the work being done in terms of poverty, it's very exciting work, but there has to be a place for women at the table," says Grumm. Women's Tribunals Join World Poverty Day Demos, 10-16-07

To be counted as standing up, view the e-card sponsored by UNIFEM and the Women's Funding Network, click here, between the hours of 21:00 GMT 10-16-07 and 21:00 GMT 10-17-07, and then share the URL (http://www.womenfightpoverty.org/ecard/) with others. The Guinness Book of Records is keeping count.

On World Poverty Day, we join the Stand Up Campaign to call on world leaders to empower the women that power the global economy — we can’t afford not to. Societies where women are more equal stand a greater chance of eliminating poverty, starting with reducing it by half by 2015. At this critical juncture between the promise and its realization, poverty remains a complex puzzle. We will neither solve it, nor see the big picture, until all essential pieces are in place.
World leaders must:
Educate girls and increase women’s “economic literacy” and political participation;
Reform discriminatory ownership and inheritance laws to help women embark on asset-building;
Remember that there is no such thing as a “gender-neutral budget” — the impact of every fiscal policy, be it relating to taxation, or resource allocation, must be assessed in terms of its impact on the lives of both men and women;
Improve child-care options and flexibility for working mothers;
Eliminate the gender gap in wages;
Include unpaid household work in national income accounts and mandate maternity and paternity leave benefits;
Give women the “credit” they deserve: facilitate women’s access to credit and finance, coupled with training, as well as involving them in the development of macro-economic policy to ensure it is gender-sensitive;
Support women’s funds to support the women for whom every day is poverty day. Call to Action, Stand Up Against Women's Poverty, UNIFEM