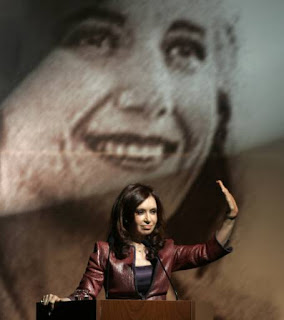 The 21st Century is an era of unprecedented crisis -- politically, economically, environmentally, and spiritually. It is, indeed, a crisis of crises on a planetary scale: e.g., global warming, nuclear proliferation, failed states, organized crime, religious fanaticism, extreme poverty, overpopulation, lack of water, deforestation, etc. And if these great challenges are not overcome, their convergence will likely lead to the extinction of the human race (at least the human race as we know it).

Human rights and the health of democratic institutions are also vital factors. The global effort to empower women politically and economically is of particular importance. (UNIFEM is acting on this imperative.)

In Asia, there is news of a disturbing trend:

Experts at the 4th Asia Pacific Conference on Reproductive and Sexual Health and Rights are painting an apocalyptical vision of the Asian region where 163 million women are ‘missing’ and the sex ratio continues to decline as a result of easy access to modern gender selection techniques. Inter Press Service, 10-3-07

In Latin America, there is news of an encouraging trend:

Cristina Fernandez de Kirchner is the second female to be elected head of a Latin American country in the last two years. The first, Chilean President Michelle Bachelet, said, "It’s not a coincidence these two neighboring countries with similar characteristics have elected women to direct their destinies." Democracy Now!, 10-30-07

The juxtaposition of these two stories underscores the fact that we are in a race against dwindling time allied with burgeoning ignorance.

When women are empowered politically and economically, life get better, democratic institutions get stronger, and economic conditions improve. But there are less of female children born every year -- at least in Asia.

Here are excerpts from both stories, with links to the full texts:

Experts at the 4th Asia Pacific Conference on Reproductive and Sexual Health and Rights are painting an apocalyptical vision of the Asian region where 163 million women are ‘missing’ and the sex ratio continues to decline as a result of easy access to modern gender selection techniques.
China tops the list of countries with a skewed sex ratio at birth (SRB) with just 100 females for every 120 males. India follows going by the country’s 2001 census, which revealed that the SRB had fallen to 108 males per 100 females.
Experts worry that unless action is taken, Nepal and Vietnam may soon have skewed SRBs. Countries like Pakistan and Bangladesh are already beginning to follow Asia’s largest countries with people resorting to medical technology to do away with the girl child at the foetal stage.
“We place it (skewed SRB) in the context of discrimination against women,” said Purnima Mane, deputy executive director UNFPA, while addressing the press. “Women are not valued.” She predicted that a continuing unhealthy SRB trend could lead to increased violence, migration and trafficking as well as greater pressures on women. Zofeen Ebrahim, Inter Press Service, 10-30-07

AMY GOODMAN: For more on Argentina’s election, I’m joined by two guests. Mark Weisbrot is on the phone from the Center for Economic Policy Research. Joining me in New York is Jocelyn Olcott. She is a professor of Latin American history at Duke University.
Let's start with you, Professor Olcott. Your response? The significance of the first woman elected president of Argentina?
JOCELYN OLCOTT: I mean, I think there’s -- you know, there are several ways to read this, but certainly two of the biggest ones is it’s clearly a rejection of -- the soundest rejection of the neoliberal project, right, and so it’s an endorsement of continuing with Kirchner’s program, which was an emphasis on social programs over, you know, the IMF project. I mean, Argentina has really aggressively rejected the IMF and structural adjustment project. And the only reason it hasn't gotten more attention is because people are so distracted by Venezuela. They haven’t really focused as much on Argentina. But Argentina has been very clear on that. And so, this is really a vote to continue with that project.
AMY GOODMAN: And explain exactly what Kirchner did and then what his wife, now the elected president of Argentina, Cristina Kirchner, will do.
JOCELYN OLCOTT: I mean, it’s interesting because it’s part of what, you know -- she forms part of what some people are calling this “pink tide,” really a turn in Latin America toward -- as part of this new left. What distinguishes this left turn from former left turns really is an emphasis on gender issues, more recognition of LGBT rights, which is something that Kirchner has been involved with. ...
AMY GOODMAN: Mark Weisbrot, your response to the victory of the first elected woman president of Argentina?
MARK WEISBROT: ... The IMF was opposed to all of the major policies, including the debt default. I mean, obviously they couldn’t pay their debt. But the IMF was pressuring them enormously to pay more to the foreign creditors, and they didn’t do it, because they knew that that would hurt the recovery. And they were under a lot of pressure. They stood up to the IMF. They even defaulted to the IMF temporarily in September 2003, which was a very gutsy thing to do, and the IMF backed down. And nobody knew really what was going to happen at that time, because they could have been, you know, punished very severely for that. So that was a historic move, as well, because it helped break the grip of the IMF and of Washington. Not only Argentina, but Latin America, was a major stage in that process of breaking up this creditors cartel, which had determined economic policy for so long in Latin America. Amy Goodman, The Pink Tide: In Defiance of IMF, Argentina Elects First Lady Cristina Fernandez de Kirchner to Become Argentina's First Elected Female President, Democracy Now!, 10-30-07

Defying Latin America’s longtime reputation as a bastion of machismo, women in South America are winning political power at an unprecedented rate and taking top positions in higher education and even, albeit more slowly, in business. ... South American women also are leading important social movements and are earning, studying and speaking out more than ever. For the first time, women are forcing their traditionally male-dominated societies to confront such issues as domestic violence and reproductive health. ...
Women are considered possible successors to the top spot elsewhere in South America.
In Paraguay, former education minister Blanca Ovelar is a top candidate to represent the long-ruling Colorado Party in next April’s presidential race. In Brazil, presidential chief of staff Dilma Rousseff has emerged as a possible front-runner for the presidency in 2010. They follow women who were elected president in Central America in the 1990s, Violeta Barrios de Chamorro in Nicaragua and Mireya Moscoso Rodriguez in Panama.
The emergence of what’s been called a “feminine bloc” in the Western Hemisphere’s Southern Cone is yet more evidence of the historic changes that have opened doors for millions of women.
Latin American women also have taken charge in more humble circumstances. Soledad Puebla, 54, runs a bustling day care center in the slums of Santiago, Chile’s capital. She’s also the activist heart of her neighborhood and a confidante of legislators in Bachelet’s government.
Puebla grew up desperately poor on the city’s periphery and worked for years as a nanny before she joined a local Lutheran church and became a community organizer. She eventually was appointed the church’s regional coordinator, which sent her around the world.
Speaking tearfully in her cramped office, she seemed astonished by her latest accomplishment - earning a college degree in social work, something that was unimaginable to the poorly educated grandparents who raised her.
“When I grew up, we didn’t even have a mattress to sleep on,” Puebla said. “So this is what I tell people now: When you want to rise as a woman and value your life, you can. But you have to be true to what you think and fulfill the agreement you make with yourself.” McClatchy Newspapers 2007

Hard Rain Journal 7-25-06: As the Next Bait & Switch Get Pulled, Remember Osama Bin Laden & the Child Brides of Afghanistan