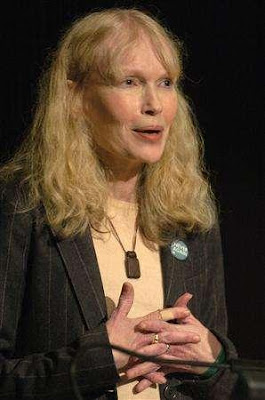 There is no elder statesman in the world who deserves more respect and admiration than former US President Jimmy Carter, or has done more to alleviate human suffering in forsaken places.

Only last week, I drew his moral authority to your attention (Crisis in Darfur Update 10-4-07: Jimmy Carter in the Sudan -- "We've got to move, or someone is going to get shot," warned one of the U.N. staff ...)

But in this post, I must challenge a statement he has made.

The Sudanese rulers resist the word "genocide" because they fear they will eventually be brought before an international tribunal for crimes against humanity.

The Chinese resist the word "genocide" because it would interfere with their considerable investment in Sudanese oil.

The Western nations have been reticent to use the word "genocide" because they do not want to accept the responsibility that such an acknowledgement would thrust on them.

These motivations are, of course, repugnant and transparently self-serving.

But why would Jimmy Carter, at the end of his participation in the Elders visit to Darfur, criticize those who describe what is going on in Darfur as a genocide?

"There is a legal definition of genocide and Darfur does not meet that legal standard. The atrocities were horrible but I don't think it qualifies to be called genocide," he said. ... Carter, whose charitable foundation, the Carter Center, worked to establish the International Criminal Court (ICC), said: "If you read the law textbooks ... you'll see very clearly that it's not genocide and to call it genocide falsely just to exaggerate a horrible situation I don't think it helps." Arthur Bright, Christian Science Monitor, 10-6-07

Coupled, as they were with those of Lakhar Brahimi, another one of the Elders, who "chastised the West for pandering to Sudanese rebel groups that may not represent the people of Darfur," Carter's remarks appear to be an attempt to establish himself and his collagues as a fair broker in further negotiations.

I pray for the success of the Elders efforts, and I hope I am proven wrong, but I will continue to use the word "genocide." I do not use the term carelessly, or without an understanding of its meaning. Nor do those who have done heroic work on the ground in Darfur and here in the West, raising the awareness of people in all walks of life, and calling the situation what it is -- a genocide.

We must keep the pressure on, and raise the stakes.

Jimmy Carter has over his lifetime earned our respect on many issues. His moral authority makes his current statements about the Khartoum kabal all the more disapointing, offensive, arrogant and unconscionably ignorant. Darfur is still ablaze and looking more like Somalia by the day. Darfurians dream of returning home and rebuilding their lives but we are not there. Not by a long shot.
Carter once called Omar al-Bashir, orchestrator of the on-going genocide in Darfur, a "courageous and enlightened leader" (for signing a worthless scrap of paper Carter had put forward, which was meaningless within weeks)
Villages are still ablaze, women are still running for their lives and being raped and mutilated, kids are still starving to death, the African Union peacekeepers are being attacked, more than 4 million people are still living in terror, 2.5 million are still sheltering in wretched camps across Darfur and eastern Chad, unable to return to their homelands because there is no safety in Darfur.
Lying is the least of President Omar al Bashir Bashir's sins. Yet accompanying "the Elders" to Sudan, Jimmy Carter found his meeting with Bashir to be "contructive. Mia Farrow, Wake up Jimmy! You're old enough to know better, 10-3-07

"This phase of the Divest for Darfur campaign urges every American to ask their financial advisor and mutual fund company one simple question: ‘Am I invested in genocide?'" said coalition spokesman, Allyn Brooks-LaSure. "Because firms such as Franklin Templeton are so heavily invested in Chinese oil company PetroChina, the answer too often will be ‘yes.' American mutual fund companies must shed their ties to investments that extend the suffering and misery for millions of Darfuris, because American investors don't want to bankroll genocide." Save Darfur! 10-3-07

Details about the target companies - and those that have divested - are available at http://www.divestfordarfur.org.