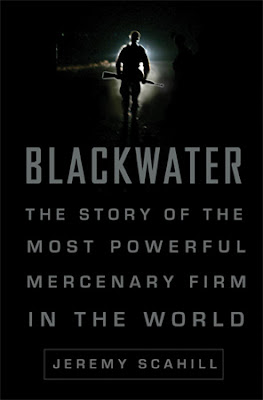 Someone who is deeply linked to the Christian right, and to the current Administration, has turned around and started what has become the world's most powerful private mercenary army. These guys are like neo-Crusaders. To have them on the government payroll to the tune of $750 million, operating in a Muslim country, should be frightening to everyone who understands that. Buzzflash Interview w/ Jeremy Scahill, 3-20-07

Rhetoric is not action.

It was designed that way, for better and worse.

When the great nations want to avoid doing something about some client state's nefarious operations, as in the cases of Burma and Darfur, they can.

When the great nations want to avoid inquiry into their own nefarious operations, as in the case of Blackwater in Iraq, they can.

In recent days, tragic events in Burma, Darfur and Iraq have highlighted the lack of courage and conscience in the corridors of global and regional power.

In Burma, the crackdown has been savage, and as yet unchallenged in any substantive way by the world beyond. At least four thousand monks taken away to be disrobed and shackled. (BBC, 10-2-07) "One hundred shot dead outside a Myanmar school. Activists burned alive at government crematoriums. Buddhist monks floating face down in rivers." (Associated Press, 10-1-07) At the Ngwe Kyar Yar monastery, an ancient Buddha statue was decapitated, and its jeweled head carried off. (First Post, 9-29-07) The military has restricted the movement of food during the ongoing political unrest, hampering UN efforts to feed some 500,000 people in the impoverished country. (Associated Press, 9-29-07)

In the West, British PM Gordon Brown has issued some strongly worded statements. But if he wants to make a difference in an immediate and tangible way, that the Chinese government can threaten to block with a veto, perhaps he should stroll down to his own shopping districts and bring the TV cameras with him. "Asprey, Cartier, Leviev and Harrods are still selling Burmese blood rubies in their central London stores, with some items costing as much as £500,000." (Times of London, 9-30-07)

In the East, the Indians say it is "an internal matter." (Agence France Press, 10-1-07) Indeed, as Burma's Buddhist monks risked death and worse to march against the gangster regime, Indian Oil Minister Murli Deora "was in the country's capital for the signing of oil and gas exploration contracts between state-controlled ONGC Videsh Ltd and Burma's military rulers." But India and China (which is the guardian protector of both the Sudanese and the Burmese regimes) are not alone in their complicity. French, South Korean, Thai and Malaysian companies, among others are also thirsty for Burma's energy resources. (Irawaddy, 9-29-07)

At least, Aung Suu Kyi was briefly freed from house detention and brought over to speak with Ibrahim Gambari, the U.N.'s special envoy for more than an hour. So we know now she is still alive. (Associated Press, 9-30-07)

And there are unconfirmed reports of mutiny within the Burmese military:

The organisation Helfen ohne Grenzen (Help without Frontiers) is reporting that "Soldiers from the 66th LID (Light Infantry Divison) have turned their weapons against other government troops and possibly police in North Okkalappa township in Rangoon and are defending the protesters. At present unsure how many soldiers involved." Soldiers in Mandalay, where unrest has spread to as we reported this morning, are also reported to have refused orders to act against protesters. (First Post)

Some Burmese troops have declared their support for the Buddhist monks who have led mass protests in the first apparent sign of disaffection in the army, exiled Burmese sources said today. Disgruntled officers have formed a group called the Public Patriot Army Association and expressed their backing for demonstrators in a letter ... (Guardian, 9-27-07)

(Ah, the Burmese junta could be a potential client for Blackwater.)

Meanwhile, in Darfur, over a thousand fighters overwhelmed an African Union base and killed at least 12 peacekeepers. 50 others were reportedly missing.

In this Democracy Now! interview with Amy Goodman, the Darfurian human rights lawyer Salih Mahmoud Osman (recipient of Human Rights Watch's highest award in 2005 and one of three finalists for the European Union's Sakharov Prize for Freedom of Thought in 2007) explains the absurdity and the agony:

AMY GOODMAN: Can you talk about the attack that just took place?
SALIH MAHMOUD OSMAN: Sure. It’s sad news -- I must confess to that -- but still, it confirms our fears that African Union forces have no capacity, and they are not in a position to provide proper protection ... to themselves, first of all, let alone the people of Darfur. ...
AMY GOODMAN: Can you talk about the overall situation in Darfur right now, the displaced people? Are the murders, the attacks, the rapes up or down?
SALIH MAHMOUD OSMAN: Sure, because the current situation is that still we have more than two-million-and-a-half people who are being forcibly displaced from their homes living in the camps right now ... And it’s very sad, very, very important to mention that the land that has been depopulated by these people is now occupied by people coming from outside Sudan, Arabs coming from Niger, from Chad, from Mali, and even from Mauritania, to settle. ... Democracy Now!, 10-1-07

On Sept. 16, 2007, a convoy of Blackwater contractors guarding State Department employees entered a crowded square near the Mansour district in Baghdad, Iraq. ... After a reported 20 Iraqi civilians were killed, including the couple and their child, who was subsequently burned to the mother's body after the car caught fire, the Iraqi government and populace exploded with anger. P.W. Singer, The dark truth about Blackwater, Salon, 10-2-07

Guards working in Iraq for Blackwater USA have shot innocent Iraqi civilians and have sought to cover up the incidents, sometimes with the help of the State Department, a report to a Congressional committee said today. New York Times, 10-1-07

U.S. security contractor Blackwater has been involved in at least 195 shooting incidents in Iraq since 2005 and, in eight of 10 cases, their forces fired first ... Committee chair Rep. Henry Waxman, a vocal critic of the Iraq war, released details from Blackwater's own reports ... Reuters, 10-1-07

Yes, Blackwater is a human rights issue. Today, it is one for the Iraqis. Tomorrow, it could be one for you and me.

Do you want Blackwater's forces deployed in your neighborhoods in the event of a catastrophe?

If martial law is declared in the aftermath of a major terrorist attack, it could be Blackwater going door to door and taking people into custody.

If civil unrest erupts in the event of an economic collapse or a fuel crisis, it could be Blackwater operating as a law unto itself on the streets of your city.

After all, the Bush-Cheney regime have conveniently robbed us of the National Guard -- by deploying it in Iraq and Afghanistan.

Yes, Blackwater is a human rights issue. Just like Burma and Darfur.

Should a corporate mercenary army, under contract to the government of a great nation, be given a license to kill without any accountability?

The answer to both questions, of course, is an emphatic "No!"

For the people of the USA, to demand an uncompromising, global human rights policy from their own government would be more than simple altruism, it would be in their own enlightened self-interest.