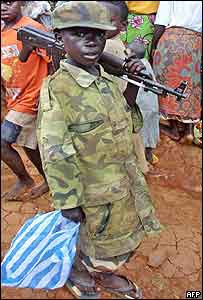 "Burma's army preys on children, using threats, intimidation and often violence to force young boys to become soldiers. To be a boy in Burma today means facing the constant risk of being picked up off the street, forced to commit atrocities against villagers, and never seeing your family again." Jo Becker Advocacy Director of the Children's Rights Division, Human Rights Watch, 10-16-07

Asked what the United Nations has done to curb the widespread use of child soldiers, Coomaraswamy singled out the establishment of the International Criminal Court, which recognises child soldiering as a war crime, and Security Council resolution 1612 of 2005, which created a monitoring and reporting mechanism regarding the use of child soldiers.
"We now have to go ahead and implement these frameworks, convict perpetrators and impose sanctions," she added.IPS, 10-18-07

Although the results of both reports should be profoundly disturbing (particularly to those who hold stock in Chevron), the reality is much worse.

The number of child soldiers in the world at any one time is typically cited as 300,000, give or take a 50,000 or so children, depending upon which civil war is currently in remission.

But as I mentioned in Human Rights Update (6-26-07) -- A Victory for Child Soldiers in Sierra Leone, But What About the Child Soldiers in the Streets of the USA? and earlier in Words of Power #3: Gangstas = Child Soldiers Without A Country, this number is grossly underestimated. Because such "guestimates" do not factor in the millions of children that have been pressed into armed service in the ranks of urban street gangs in Los Angeles, Rio de Janiero and other cities throughout the world.

If the human race cannot protect its children, it has no future spiritually or psychcologically, whether it survives biologically or not.

Here are excerpts from stories on the two reports, with links to the full texts:

Burma has a poor human rights record, but its record on child soldiers is the worst in the world," said Jo Becker, advocacy director of the Children's Rights Division at Human Rights Watch.
Burma's army has doubled in size since 1988, and with an estimated 350,000 soldiers is now one of the largest armies in Southeast Asia. According to the accounts of former soldiers interviewed by Human Rights Watch, 20 percent or more of its active duty soldiers may be children under the age of 18.
The 220-page report, "My Gun was as Tall as Me: Child Soldiers in Burma," is the most comprehensive study of child soldiers in Burma to date. Drawing on interviews with more than three dozen current and former child soldiers, the report examines child recruitment by 19 different armed opposition groups in addition to Burma's national army.
Recruiters for Burma's army frequently apprehend boys at train and bus stations, markets and other public places, threatening them with jail if they refuse to join the army. The boys are given no opportunity to contact their families, and are sent to camps where they undergo weapons training, are routinely beaten, and brutally punished if they try to escape. Human Rights Watch received several accounts of boys who were beaten to death after trying to run away.
Once deployed, boys as young as 12 engage in combat against opposition groups, and are forced to commit human rights abuses against civilians, including rounding up villagers for forced labor, burning villages, and carrying out executions. Human Rights Watch, 10-16-07

When the former first lady of Mozambique Gracha Machel authored a 1996 landmark report on child soldiers, she said that military commanders on the ground had told her that children were "impressionable and easy to dominate".
"They were good soldiers because they obeyed orders without challenge," the commanders told Machel.
Moreover, when most children lost their parents and communities, they often joined the military primarily "for food and safety", Machel pointed out in her groundbreaking study titled "Children in Armed Conflict".
But more than 10 years -- and dozens of conflicts -- later, the landscape has not changed significantly. ...
A special study on child soldiers that follows on the Machel report, released Wednesday, says that dozens of conflicts worldwide are still "robbing children of their childhood."
Authored by Radhika Coomaraswamy, the special representative of the secretary-general for children and armed conflict, the report says that despite the gloomy picture, the international community has been very active in developing "a solid legal protection framework" for children. ...
Asked what the United Nations has done to curb the widespread use of child soldiers, Coomaraswamy singled out the establishment of the International Criminal Court, which recognises child soldiering as a war crime, and Security Council resolution 1612 of 2005, which created a monitoring and reporting mechanism regarding the use of child soldiers.
"We now have to go ahead and implement these frameworks, convict perpetrators and impose sanctions," she added. Thalif Deen, Inter Press Service via Asian Tribine, 10-18-07