Hard Rain Journal: Some People in the US Congress are Willing to Articulate the Unspeakable; Unfortunately, Most Wear Visitor's Badges. 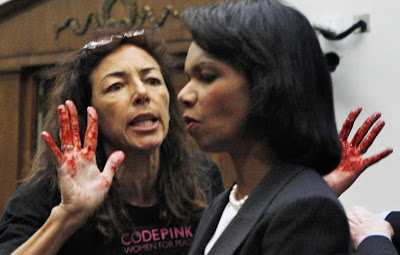 Hard Rain Journal: Some People in the US Congress are Willing to Articulate the Unspeakable; Unfortunately, Most of Wear Visitor's Badges.

There are some people in the Congress of the United States willing to articulate the unspeakable; unfortunately, most of them are wearing visitor's badges.

She has earned praise, prayers and protection.

In a dramatic act of dissent at a House Foreign Relations Committee hearing, Desiree confronted Condoleeza Rice, up close and personal. She held up her hands, dripping with fake bloods, and said, "Blood of millions of Iraqis is on your hands."

As she was dragged from the room, she called out "War criminal! ... War Criminal!

At the exit, she added, "Take her to the Hague."

It was the act of a powerful medicine woman.

Raw Story has the video.

I urge you to watch it.

Meanwhile, the horrific consequences and mind-blowing costs of this foolish military adventure continue to mount:

The Bush administration once imagined that its presence in Afghanistan and Iraq would be anchored by friendly neighbors, Turkey to the west and Pakistan to the east. Last week, as the situation in Iraq and Afghanistan continued to deteriorate, the anchors themselves also came loose.
On Sunday, just days after the Turkish Parliament authorized an invasion of Iraqi Kurdistan, Kurdish guerrillas ambushed and killed 17 Turkish soldiers inside Turkey. In Karachi, Pakistan, a massive bomb nearly killed U.S.-backed Benazir Bhutto, who was supposed to help stabilize the country. The Bush administration’s entire Middle East policy is coming undone — if it even has a policy left, other than just sticking its fingers in the multiple, and multiplying, holes in the dike. Juan Cole, Salon, 10-24-07

The Congressional Budget Office (CBO) reported today that “total spending for U.S. operations in Iraq and Afghanistan and other activities related to the war on terrorism would amount to between $1.2 trillion and $1.7 trillion for fiscal years 2001 through 2017.” With $705 billion in interest, the cost of the wars could amount to $2.4 trillion — with $1.9 trillion in Iraq. Think Progress, 10-24-07

President George Bush will have spent more than $1 trillion on military adventures by the time he leaves office at the end of next year, more than the entire amount spent on the Korean and Vietnam wars combined.
There are also disturbing signs that Mr Bush is preparing an attack on Iran during his remaining months in office. He has demanded $46bn (£22.5bn) emergency funds from Congress by Christmas and included with it a single sentence requesting money to upgrade the B-2 "stealth" bomber. Leonard Doyle, Independent, 10-24-07

For the full Congressional Budget Office report on Estimated Costs of U.S. Operations in Iraq and Afghanistan and of Other Activities Related to the War on Terrorism, click here.