Yoko Ono speaking in Reykjavik, Iceland at the unveiling of the Imagine Peace Tower: We are here together, billions of us, standing at the dawn of a new age, determined to shift the axis of the world to health, peace and joy by loving and caring for all lives on earth.
Some of us are here physically, some are joining us in spirit. Some of us are imprisoned, tortured, maimed and silenced, but they are also here today with us. Some of us have passed away before being able to enjoy a new age of love and peace. But we are all here today, standing together with hope.
The light is the light of wisdom, healing and empowerment. Even in the moments of confusion, fear and the darkness of your souls, hold the light in your hearts, and you will know that you are not alone, that we are all together in seeing the light of peace. Democracy Now!, 10-16-07

Dedicated to the memory of John Lennon, the Imagine Peace tower projects a stream of light thirty meters into the sky, and bears the inscription “Imagine Peace," written in twenty-four languages.

For more information on this powerful magic, and how to spread awareness of it, go to www.imaginepeace.com.

In the presence of 200 dignitaries including Yoko Ono, Sean Lennon (who shares his father's birthday), Ringo Starr, the late George Harrison's widow Olivia, an eminent associate of the Dalai Lama along with civic leaders of the city of Reykjavik, the Imagine Peace Tower was turned on for the first time.
It represents a beacon to world peace in an increasingly troubled world. A world in which oil has become not only a prominent generator of global warming but also an alleged cause for modern warfare, including the war in Iraq. ...
"I have chosen Iceland for the Imagine Peace Tower because it is a unique eco-friendly country," Yoko Ono, 73, commented at a special conference.
"Eighty per cent of Iceland's energy is provided by water, not oil. Because of this, the air, earth and water are surprisingly pure and clean. ...
"Geo-thermal energy has made Iceland independent, and I think that Iceland is now more independent than any other country.
"There's a lot of caring and concern on a very high sensitivity level in this country Iceland. So no wonder I wanted to do the Peace Tower here. Ritchie Yorke, The Age, 10-10-07

YOKO ONO: And, you know, there are many interesting things about this, surrounding this, because I think that they found out that Edgar Cayce said something about there will be a tower of light in the foremost northern country, which will spread peace to the world, something like that. I think Edgar Cayce said that. So I don’t know, you know. It seems like somehow I’m fulfilling the prediction or something. But I didn’t know that. And, you know, they told me about that in Iceland. Yoko Ono, Democracy Now!, 10-16-07 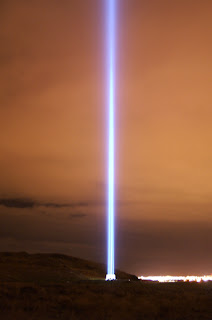