The Japanese Peace Bell [at United Nations Headquarters, New York City] was presented to the United Nations in June 1954 by the United Nations Association of Japan. It was cast from coins collected by people from 60 different countries including children, and housed in a typically Japanese structure, ressembling a Shinto shrine, made of cypress wood. It has become a tradition to ring the bell twice a year: on the first day of Spring, at the Vernal Equinox, and on 21 September to coincide with the opening of the General Assembly. 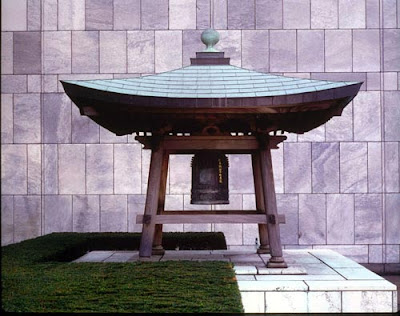 Mithre J. Sandrasagra of Inter Press Service (IPS) reports on a survey conducted by the Chicago Council on Global Affairs in collaboration WorldPublicOpinion.org (WPO) and involving polling organisations from around the world.

The survey's findings encouraging, particularly after the damage inflicted on the collective psyche since 2000.

The results reflect the innate common sense and conscience of the human race, and indicate that there is a vast resource from which to draw the spiritual vision, broad consensus and political will needed to deal with our global security and sustainability crisis.

Only the leadership is lacking.

Here is an excerpt from the IPS story:

According to the results of a groundbreaking 18-nation poll released Wednesday, people around the world favour dramatic steps to strengthen the United Nations, including giving it the power to have its own standing peacekeeping force, to regulate the international arms trade and to investigate human rights abuses. ...
The survey found that 12 of 14 populations polled believe there should be a standing peacekeeping force "selected, trained and commanded" by the U.N. ...
The Chicago Council on Global Affairs conducted the poll with WorldPublicOpinion.org (WPO), in cooperation with polling organisations around the world. ...
"While leaders of nation states may be wary of giving the U.N. more power it is clear that publics around the world are comfortable with the idea of a stronger U.N.," said Steven Kull, editor of WPO. ...
The new study is based on interviews carried out in countries that represent 56 percent of the world's population: Argentina, Armenia, Australia, China, France, India, Iran, Israel plus the Palestinian territories, Mexico, Peru, the Philippines, Poland, Russia, South Korea, Thailand, Ukraine, and the United States.
Some of the highest support for a standing U.N. peacekeeping force was found in Peru (77 percent), France (74 percent), and the U.S. (72 percent).
Support for "giving the U.N. the power to regulate the international arms trade" is nearly as robust (55 percent on average).
Majorities or pluralities in 12 countries support this idea, especially France (77 percent), South Korea (75 percent), Israel (60 percent) and the U.S. (60 percent). ...
Giving the U.N. authority "to investigate violations of human rights" received very high levels of support in France (92 percent), the U.S. (75 percent), Peru (75 percent), and South Korea (74 percent).
This idea is favoured by majorities or pluralities in the 13 of the 14 countries surveyed for an average of 64 percent overall.
The idea of giving the U.N. authority to fund its activities through a tax on the international sale of arms or oil is supported by nine out of 14 countries polled (on average 46 percent support this, while 37 percent oppose). ...
Very large majorities also agree that the Security Council has the right to use force to stop genocide.
Majorities or pluralities in all 12 countries polled on this issue go further and say the U.N. has the responsibility to use force to stop massive human rights abuses.
Mithre J. Sandrasagra, Global Public Favours Stronger U.N., Inter Press Service, 5-9-07

I have no doubt that if they had polled on whether or not the UN should have the power to limit greehouse gas emissions on a planetary scale the same level of awareness and unity would have shown in the responses.