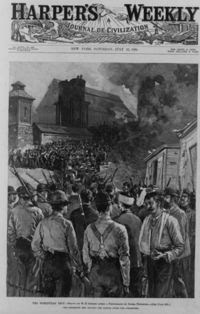 The Homestead Strike was a labor lockout and strike which began on June 30, 1892, with a battle between the strikers and private security agents erupting on July 6, 1892. It is one of the most serious labor disputes in U.S. history.

David Sirota is one of the most important voices in US politics today.

Here are some excerpt from his powerful speech at the Montana AFL-CIO Convention in Butte, Montana (5-18-07), with a link to the full text:

We are, right now, in the middle of a class war--one that threatens to destroy the social contract that has made this country what it is today. The statistics are grim. Today, American workers' take-home pay represents a smaller share of the nation's total income than at any time in the last forty years. At the same time, corporate profits as a share of national income are at an all-time high. In all, the top 1 percent of Americans--those who make on average $1 million a year or more--owns a larger percentage of the nation's wealth than at any time since the Great Depression.

None of this, of course, happened by itself. These trends occurred at precisely the same time our government threw its lot in almost exclusively with those at the top. Consumer protection and environmental laws have been decimated, as corporate lobbying has become a multibillion-dollar industry. At a time of war and deficit, we have upcoming federal tax cuts that will hand roughly a half-trillion dollars to the wealthiest 1 percent--tax cuts for millionaires are larger than the annual income of the average American household.

And labor laws have been weakened, creating in many cases the modern-day version of the turn of the twentieth century, where employers openly busted unions with brutal tactics. Whereas we once experienced the brutal tactics of mine company owners at Cripple Creek, Colorado, we now experience the brutal tactics of Wal-Mart thugs at Loveland, Colorado, where they recently broke the back of a fledgling organizing campaign. The Occupational Safety and Health Administration--the government agency that enforces workplace safety laws--has seen its budget slashed to the point where it would take the agency 108 years to inspect every work site under its jurisdiction. That has meant real consequences in this region. ...

For this movement to ultimately be successful not only on trade but on all the other economic challenges we face both at the federal level and here at home, we will be required to make a choice: Will we get busy living, or get busy dying? ...

But make no mistake about it, the decision about whether to get busy living or get busy dying is one fraught with peril. Even a cursory look at our country's history shows that you can't make real change without making real enemies--whether they are lobbyists, executives, legislators, congressmen or senators. But we also know that the path of least resistance that may be lined with happy smiles and big campaign contributions and pats on the back by those in power is the way to get busy dying--the way to perpetuate what has become an intolerable status quo for millions of Americans.

I've struggled with the question of whether to get busy living or get busy dying in my own career, and in taking the path I have taken, I've certainly made some enemies, and have been far from perfect. But as I get older, I constantly catch myself thinking about what I will regret and not regret at the end of my life--and it haunts me to think I may regret not pursuing the cause of economic justice because I was too afraid to make enemies.

Such thoughts may be morbid, but they are necessary. And so I conclude by asking again: Will we get busy living, or get busy dying?

The full Transcript of David Sirota's "Get Busy Living, or Get Busy Dying" is available at The Nation

For more on the "Secret Trade Deal," click here for Bill Moyers Journal.