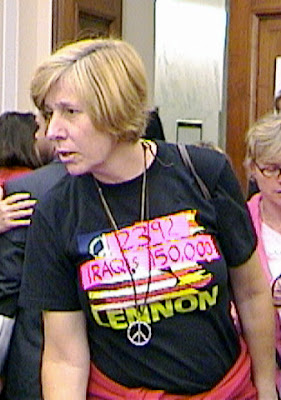 The most devastating conclusion that I reached this morning, however, was that Casey did indeed die for nothing. His precious lifeblood drained out in a country far away from his family who loves him, killed by his own country which is beholden to and run by a war machine that even controls what we think. I have tried every since he died to make his sacrifice meaningful. Casey died for a country which cares more about who will be the next American Idol than how many people will be killed in the next few months while Democrats and Republicans play politics with human lives. Cindy Sheehan. 5-28-07

Remember Cindy Sheehan? Lindsay Lohan and Paris Hilton are still in the news. People are searching heavily on their Technorati tags. But on this Memorial Day Weekend, there was almost no coverage of what Cindy Sheehan was up to, and she was making real news.

It was the image of Cindy Sheehan, camped out in the murderous heat outside of Bush's faux ranch in Crawford, Texas that captured the public imagination and led to Bush's slide in the opinion polls. A year later, Hurricane Katrina sent him plummeting, but it was Sheehan that got the downward momentum going. She did it with her openness, her genuineness, her authenticity, her humanness. But, of course, these same qualities made her vulnerable.

Cindy Sheehan was promoted as long as she held the mirror to George W. Bush, but when she turned it on the leadership of the Democratic Party, and on the whole of Beltwayistan, she was crossed off the list.

Oh, of course, she was accepted when she first bore ill-tidings about the Bush-Cheney regime. It made many people feel like they were somehow better than Bush or Cheney or their minions. But when she challenged the complicity and cravenness of those who would continue to do business as usual as war crimes were committed in our names, she became unwelcome.

Cindy Sheehan was willing to try to walk in the shoes of Caesar Chavez, Aung San Suu Kyi and others. But the US Senate members who Cindy lobbied weren't so willing to jeopardize their position. Those who underwrite their life-styles and subsidize their perennial campaigns would not have tolerated such "radicalism."

What has happened to Cindy Sheehan is more than just a sad footnote in a grim and despairing chapter of US history; it is a warning, and an ominous sign.

Ask yourselves, "What happens to a country that refuses to change its course after its self-destructive, self-defeating, self-abasing behavior is revealed?"

Here are some excerpts from Cindy Sheehan's goodbye note, with a link to the full text:

I have come to some heartbreaking conclusions this Memorial Day Morning. These are not spur of the moment reflections, but things I have been meditating on for about a year now. The conclusions that I have slowly and very reluctantly come to are very heartbreaking to me.
The first conclusion is that I was the darling of the so-called left as long as I limited my protests to George Bush and the Republican Party. Of course, I was slandered and libeled by the right as a "tool" of the Democratic Party. This label was to marginalize me and my message. How could a woman have an original thought, or be working outside of our "two-party" system?
However, when I started to hold the Democratic Party to the same standards that I held the Republican Party, support for my cause started to erode and the "left" started labeling me with the same slurs that the right used. I guess no one paid attention to me when I said that the issue of peace and people dying for no reason is not a matter of "right or left", but "right and wrong." ...
I have invested everything I have into trying to bring peace with justice to a country that wants neither. If an individual wants both, then normally he/she is not willing to do more than walk in a protest march or sit behind his/her computer criticizing others. I have spent every available cent I got from the money a "grateful" country gave me when they killed my son and every penny that I have received in speaking or book fees since then. I have sacrificed a 29 year marriage and have traveled for extended periods of time away from Casey’s brother and sisters and my health has suffered and my hospital bills from last summer (when I almost died) are in collection because I have used all my energy trying to stop this country from slaughtering innocent human beings. I have been called every despicable name that small minds can think of and have had my life threatened many times.
The most devastating conclusion that I reached this morning, however, was that Casey did indeed die for nothing. His precious lifeblood drained out in a country far away from his family who loves him, killed by his own country which is beholden to and run by a war machine that even controls what we think. I have tried every since he died to make his sacrifice meaningful. Casey died for a country which cares more about who will be the next American Idol than how many people will be killed in the next few months while Democrats and Republicans play politics with human lives. ...
I have also tried to work within a peace movement that often puts personal egos above peace and human life. This group won’t work with that group; he won’t attend an event if she is going to be there; and why does Cindy Sheehan get all the attention anyway? It is hard to work for peace when the very movement that is named after it has so many divisions. Our brave young men and women in Iraq have been abandoned there indefinitely by their cowardly leaders who move them around like pawns on a chessboard of destruction and the people of Iraq have been doomed to death and fates worse than death by people worried more about elections than people. ...
George Bush will never be impeached because if the Democrats dig too deeply, they may unearth a few skeletons in their own graves and the system will perpetuate itself in perpetuity. ...Camp Casey has served its purpose. It’s for sale. Anyone want to buy five beautiful acres in Crawford, Texas? I will consider any reasonable offer. I hear George Bush will be moving out soon, too...which makes the property even more valuable. This is my resignation letter as the "face" of the American anti-war movement. ... Good-bye America ... you are not the country that I love and I finally realized no matter how much I sacrifice, I can’t make you be that country unless you want it. It’s up to you now.
Cindy Sheehan, Daily Kos, 5-28-07