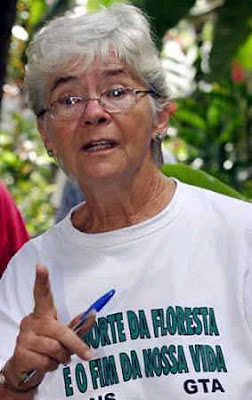 On Tuesday, 5-15-07, two seemingly unrelated events occurred, a death and murder conviction, one in the Northern Hemisphere, the other in the Southern Hemisphere.

But for those with eyes to see and ears to hear, there is a connection between the two.

In February 2005, Sister Dorothy Stang, a 73-year-old nun from the USA, was shot six times in the back, on a path in the rainforest. Stang had become a Brazlian citizen. She was fighting to protect both the environment and the poor people of the region.

On Tuesday, 5-15-07, the Brazilian landowner who masterminded her death was given the maximum sentenced of thirty years in prison.

In September 2001, while the stench of burning flesh still filled the nostrils of emergency workers who would have to fly to Cuba for medical care six years later, Rev. Jerry Falwell was blaming "the Pagans, and the abortionists, and the feminists, and the gays and the lesbians who are actively trying to make that an alternative lifestyle, the ACLU, People For the American Way, all of them who have tried to secularize America" for the slaughter of the innocents on 9/11.

Contrast the altruism and personal sacrifice of Sister Stang with Jerry Falwell's air-conditioned, plushly carpeted life as a reich-wing kulchur warrior; and then ask yourself some questions:

Where would the USA be if the Stang's life of courage and conscience had been considered as "newsworthy" as that of Falwell's ministry of fear and shame -- even if just on Tuesday, 5-15-07, if not for the last several decades of decline into christo-facism and crony capitalism?

What would the USA be like today if the Christianity of Rev. Martin Luther King, President Jimmy Carter, Rev. William Sloane Coffin, Sister Dorothy Stang and others had been extolled in the US mainstream news media, instead of, or even in parity with the twisted creed of Falwell, Robertson, Dobson and the others?

This is one of the great spiritual challenges of the 21st Century.

Here is a brief excerpt of the Stang story with a link to the full text:

Wealthy landowner Vitalmiro Bastos de Moura was given the stiffest possible sentence, 30 years, on Tuesday for being one of the masterminds behind the February 2005 murder of the 73-year-old defender of the Amazon rainforest and landless people.
The verdict "is very important, first of all because it was the maximum sentence and secondly because he is actually in prison," unlike what occurred in three similar cases in the region, [French priest and lawyer Henri Burin des] Roziers, who like Stang before her murder is on a death list in Pará, told IPS. ... "But for this to be meaningful, a greater number of masterminds will have to be sentenced. If in five years, for example, between 80 and 90 percent of intellectual authors were convicted, we would begin to see practical repercussions" -- a scenario that is overly optimistic for Brazil in the short- to medium-term, however, said the attorney.
Fabiana Frayssinet, BRAZIL: Dorothy Stang Sentence - More Than Symbolic?, Inter Press Service, 5-16-07