Hard Rain Journal 5-5-07: Vive Segolene! France is at a Crossroads, if Sarkozy Wins the World will Slide even Closer to the Abyss 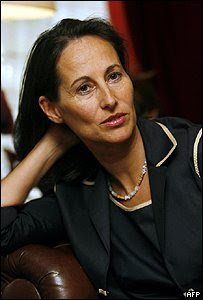 Hard Rain Journal 5-5-07: Vive Segolene! France is at a Crossroads, if Sarkozy Wins the World will Slide even Closer to the Abyss

The USA has forgotten itself. It wears a flag lapel pin and thumps a Bible, but it has misplaced the Constitution and turned away from the Goddess in the harbor of New York.

And it was the French who did what those who love you do when you are destroying yourself, it confronted the USA and refused to participate in the Bush-Cheney regime's immoral and suicidal military adventure in Iraq.

He is a Rudy Giuliani. He is a Benjamin Netanyahu.

He is trouble -- for France, for Europe, and therefore, for the world.

"Conventional wisdom" says Sarkozy will win this election. I pray it is as wrong.

Jacques Chirac did not want Sarkozy. He knew.

And François Bayrou has said he will not vote for him. He knows.

Words of Power will not endorse any candidate in the US 2008 presidential race for quite some time yet, but it does enthusiastically and hopefully endorse Segolene Royal in election going on today and tomorrow in France.

I know Europe well, I have traveled and worked there extensively. I have many colleagues in the European capitals. It will be a sad day for Europe if Sarkozy wins.

There is tension and danger right now. His victory will heighten the tension and the danger, while only aggravating the underlying causes.

The French have escaped the tragedies visited upon the Spaniards, the Italians and the British, whose leaders (Blair, Aznar and Berlusconi at the time) were in league with the Bush-Cheney cabal on Iraq. If Sarkozy wins, I fear the French too will suffer from the illness of both the terrorists and its own leader.

Here are some cogent news and analysis on the French race from the Guardian, the Nation and the Boston Globe:

On the last day of official campaigning, opinion polls indicated that Sarkozy was enjoying a commanding lead over Royal, who accused the former interior minister of lying and polarizing France.
"Choosing Nicolas Sarkozy would be a dangerous choice," Royal told RTL radio.
"It is my responsibility today to alert people to the risk of [his] candidature with regards to the violence and brutality that would be unleashed in the country," she said.
Pressed on whether there would actually be violence, Royal said: "I think so. I think so." She said Sarkozy's social policies as interior minister had increased tensions in the country, referring specifically to France's volatile suburbs hit by widespread rioting in 2005. ... Royal refused to give up, saying polls could not be trusted.
"I want to tell voters to come and vote in great numbers and to not let themselves be manipulated by these opinion polls," she told France 3 television during a last-minute campaign whirl through the northwestern region of Brittany. Boston Globe, 5-5-07

While still refusing to formally take sides in the French presidential election run-off, François Bayrou today announced that he would not be voting for rightwing challenger Nicolas Sarkozy on Sunday.
The centrist candidate, who finished third in the first round of the election on April 22 with 18.6% of the vote, told Le Monde today that following last night's debate between Mr Sarkozy and Socialist challenger Ségolène Royal he "will not vote" for Mr Sarkozy. Guardian, 5-3-07

The issue is not anti-Americanism versus pro-Americanism, as the sillier U.S. commentators might suggest. ... the issue is whether France should maintain an explicit policy of setting her own agenda when it comes to international affairs or follow the lead of Tony Blair's Britain and establish a policy of generally deferring to Washington -- even when the leaders there may be less than competent. Far from being offended by foreign leaders who seek to keep their distance from the U.S. and its presidents, Americans should recognize the value of having international allies who are willing to speak bluntly about what they think to be mistaken policies of a U.S, president.
The Socialist Party candidate, Segolene Royal, has made French independence in international affairs an central focus of her campaign. At a rally in Toulouse, before 17,OOO cheering supporters, she declared, "We will not genuflect before George W. Bush. In Europe, we will defend the emergence of a multi-polar world, safe from the imperial temptations of another age." ... Referring to a trip to Washington on which Sarkozy met with Bush and requested that they be photographed together, she says, "I shall not be the one to shake George Bush's hand like nothing happened [in the sometimes bitter pre-war debate over Iraq], without a word on our tactical and strategic disagreements in fighting religious extremism and terrorism.
Specifically, Royal says, "I am not for a Europe that allies with the U.S. I have never been, and will never. apologize to President Bush for the position of France on the issue of refusing to send troops to Iraq." John Nichols, The Nation, 5-4-07