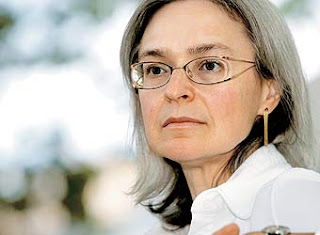 This issue of Words of Power features the posthumous presentation of a UNESCO award to Russian journalist Anna Politkovskaya (her killers have yet to be identified) and a statement from the National Union of Journalists of the Philippines (NUJP).

The murder of Politkovskaya is reported to be the thirteenth “contract-style” hit in Russia since 2000.

The Philippines is ranked as one of the most dangerous place in the world for journalists, second only to Iraq.

Unless there is a relentlessly aggressive, fiercely independent news media to expose official corruption, the influence of organized crime and other poisonous elements, a country's democratic institutions are easily subverted.

I write about the failures and weaknesses of the US mainstream news media (MSM) on an ongoing basis, but I won't disrespect the blood of fallen journalists in Moscow and Manila, by enumerating the US MSM's weaknesses and failures in this post.

For more on the complicity, cravenness and cowardice, go to the following sites:

Here are excerpts from an IPS story on the posthumous UNESCO award for Anna Politkovskaya and the NUJP's statement on World Press Freedom Day:

A posthumous award will be presented on Press Freedom Day … in honour of Anna Politkovskaya, the investigative reporter who exposed human rights abuses including rape, abductions and killings in the breakaway republic Chechnya. This will be the first time that the United Nations Educational, Scientific and Cultural Organisation (UNESCO) prize is awarded posthumously. The prize, to be presented in Colombia, honours a person or organisation who have made a notable contribution to the defence of press freedom. The award has been instituted in memory of Colombian journalist Guillermo Cano who was killed in 1986 for exposing the country's drug lords. … The award this year marks a worrying collapse of press freedom in Russia. … The New York based Committee for the Protection of Journalists (CPJ) told IPS in an emailed comment that Russian authorities should pay homage to Politkovskaya by bringing her killers to justice.
"No one deserves this prize more than our colleague Anna Politkovskaya, who gave her life for the pursuit of truth and the story of the forgotten war in Chechnya," the committee's executive director Joel Simon told IPS.
"Her death is a great loss to journalism. This award highlights the terrible price Russian journalists pay for exposing corruption, organised crime, human rights violations, and abuse of power."
Politkovskaya, special correspondent for Novaya Gazeta, was well known for her investigative reports on human rights abuses by the Russian military in Chechnya. In seven years of covering the second Chechen war, her reporting repeatedly drew the wrath of Russian authorities.
Her murder in October 2006 was the 13th contract-style killing of a journalist in Russia since 2000, according to CPJ research. None of the perpetrators has been convicted.
The media watchdog members who visited Moscow earlier this year were told that Russia's prosecutor general has opened a criminal investigation into several police officials in Chechnya in this case.
The committee found that Russian police and prosecutors have routinely failed to investigate the murders of journalists thoroughly. Kester Kenn Klomegah, PRESS FREEDOM DAY-RUSSIA: Posthumous Honour Points to Muzzled Media, Inter Press Service, 5-2-07

Today is World Press Freedom Day. Today, we in the Philippine media again mark this day in commemoration and mourning of what we should be celebrating, press freedom.
Yes, our government has never tired of boasting that we are the freest, most vibrant press in Asia. Vibrant we will not dispute. For Philippine journalism has continued to remain vibrant, indeed continues to flourish, despite persistent attempts to stifle press freedom. The numbers speak for themselves. Less than two weeks ago, Carmelo Palacios of government-run Radyo ng Bayan was founded brutally murdered in Nueva Ecija, the 51st journalist slain under this administration and the 88th since 1986. A day after, the tally would have risen by another life had not the assailants botched their ambush of Inquirer correspondent Delfin Mallari Jr. and dzMM's Johnny Glorioso, both founding members of the NUJP in Quezon province. We again emphasize that this is the highest toll under any administration, far surpassing that of the 14-year Marcos dictatorship, or the combined death toll of the three preceding administrations combined, making the Philippines the second most dangerous place for journalists after war-torn Iraq. Countless other journalists continue to labor daily with threats to either their lives or freedoms hovering over their heads. …
But while the situation is bleak, Filipino journalists have by and large refused to be cowed and continue struggling to push back the walls closing in around them. Which is as it should be. For the democratic space we have won back after long struggle is too precious to surrender. We cannot allow, through submission or default, ourselves, our people and nation, to be plunged back into the darkness of official tyranny. We therefore call on our colleagues, on other media organizations, and the people we serve, to stand together once again to meet the mounting threats head-on and resolve to drive them back once and for all. Today is World Press Freedom Day. Yes, we will commemorate this day by remembering those who have perished in its defense and mourning its absence. But let us not stop there. Let us, too, commemorate this day by making a vow that we will persevere until we can truly mark this day by celebrating the full blooming of press freedom in our land. Statement of the National Union of Journalists of the Philippines, World Press Freedom Day, 5-3-07