Image: US Marines raise the flag at Iwo Jima, where my father fought. 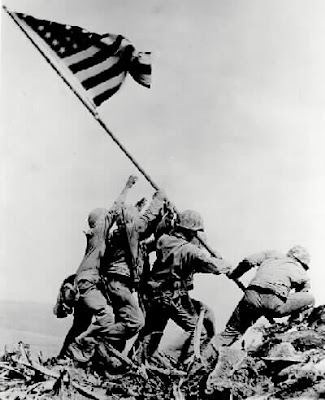 Over 3400 men and women of the US military have died in Iraq, as of this date. (Iraq Coalitions Casuality Count) Furthermore, the rate at which they are dying is increasing. Almost one thousand have died since last Memorial Day, more than the year before. Over 100 died last month. Probably over one hundred more will die by the end of this month. Tens of thousands have been injured, many for life; tens of thousands more have been emotionally scarred, all of them for life. (Associated Press, 5-27-09) It is indeed a Mega-Mogadishu, and each day we slide closer to our own Dien Bein Phu.

Four million Iraqis have been displaced (approximately 15% of the population). (Relief Web, 5-14-07) As a global humanitarian crisis, it is second only to Darfur.

The real enemy, i.e., the one that attacked the USA on 9/11 is waxing, not waning: both Al Qaeda and the Taliban are resurgent, Bin Laden and Zawahiri remain alive and at large. The removal of Saddam Hussein has pulled the plug on their mayhem in the region. Our occupying military force has both provided a big, juicy target and a powerful catalyst for recruitment.

Meanwhile, in a Memorial Day weekend commencement address at the US Military Academy (West Point), VICE _resident Dick Cheney, a Vietnam era chickenhawk -- who should perhaps be fighting for his own freedom in both US and international courts for much of what has transpired over the last seven years -- spoke contemptuously and misleadingly about the Geneva Accords. (Raw Story, 5-26-07)

But there is something more. What is terribly wrong is not only wrong in the US mainstream news media and the political establishment of Beltwayistan -- it is wrong in our places of higher learning, our board rooms and our houses of worship.

No, it is worse -- it is a collective moral, psychological and spiritual break with reality that we are suffering in the USA.

Perhaps by next Memorial Day, this madness will have ended, or the people of the USA will find themselves we they already need to be -- in the streets, exercising their democratic right of dissent in honor of the US military and the Constitution that the men and women of the US military have sworn to serve and defend -- against all enemies foreign and domestic.

To show your support, I urge you to go to VoteVotes.org and contribute to the struggle.