Human Rights Update 5-14-07: If The Indigenous Peoples Perish, The Earth's Soul Will Crack; Humanity Must Choose A Better Way 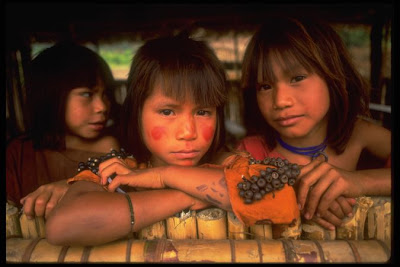 Human Rights Update 5-14-07: If The Indigenous Peoples Perish, The Earth's Soul Will Crack; Humanity Must Choose A Better Way

If you saw a group of men being sawed in half, one after another, and then stacked on a pallet, what would you feel?

If you saw children drinking from the hose of tanker truck full of toxic waste, what would you do?

If your car ran out of gas and the emergency road crew dragged a woman from the side of the road, forced her to the ground, crushing the small seashells, bird feathers and twigs she carried in her hands, and then opened a vein and ran a tube from her into your gas tank, would you get back in your car and turn the ignition?

You would not tolerate such cruelty, would you?

And yet, this is what is happening in the great forests and sacred mountains.

As the news stories included below illustrate -- for the planet's indigenous peoples, these are not metaphors, these are everyday realities.

Scanning the business section of the newspaper for investments and opportunities, you read about "timber," "copper," "silver," "gold," "platinum," "diamonds," "oil, "natural gas," etc. But what you think of as exploitable resources, indigenous peoples in the remote regions of the world experience as integral parts of themselves, just as surely as their own flesh, blood, bones, and vital organs.

History has already refuted Karl Marx, and it is in the process of refuting Ayn Rand. Objectivism and laissez-faire capitalism are just as impractical and inhuman as Marxism and the totalitarian abberation it birthed.

The human race has to go a third way: i.e., toward sustainable, open societies, organized on democratic principles, grounded in human rights, and run on green power and fair markets. But to change course, humanity must first acknowledge and embrace the interconnectedness and interdependence of all life.

Here are some recent stories from Peru, Guyana, the Congo, Taiwan and elsewhere, which highlight the plight of indigenous peoples as well as urgent efforts to defend their rights:

Members of the indigenous Achuar communities in the Amazon basin in the Peru-Ecuador border region have notified US Oil Company Occidental Petroleum (Oxy) that they will bring a lawsuit against the company in the US if it will not clean up toxic waste from drilling.
Achuar children in the area are suffering from high blood levels of cadmium and lead, both of which are thought to create grave developmental problems. Recent environmental reports by EarthRights International (ERI), Amazon Watch, and Peruvian legal non-profit Racimos de Ungurahui support previous conclusions reached by the Peruvian government in linking Oxy to the toxins. The report is “based on information gathered by a team of experts in May 2006 – including a doctor, nurse, lawyers, soil scientist, agronomist, environmental engineer, and chemist.” About 8,600 people in five separate communities are blaming Oxy for high blood toxin levels.
The report says that Oxy used cost-cutting, out of date practices to boost profits. These included the use of “earthen pits to store drilling fluids, crude oil and crude byproducts.” The report says that the toxic chemicals overflowed and leached through their soil containers and into the surrounding ground and water.
The company is also accused of dumping a daily average of 850,000 barrels of toxic oil byproducts into rivers and streams on Achuar land, causing repeated oil spills and dumping a total of 9 billion barrels of untreated toxic and carcinogenic processing water into rainforest land.
April Howard, Peru: Amazon Communities Warn Oxy Over Toxins, 5-9-07

Groups representing indigenous peoples in Guyana, along with Cambodia, Malaysia and Papua New Guinea, on Thursday urged the Swiss bank Credit Suisse to pay them 10 million dollars in compensation because of its links with a Malaysian timber company.
The company, Samling, retained Credit Suisse as an adviser during its stock market flotation in February, along with HSBC and Australian bank Macquarie.
The indigenous peoples claim that Samling's operations have damaged their communities by cutting down forests and in some cases, polluting sources of drinking water.
"We're slowly dying," a representative of the Penan people from Malaysia told journalists at a press conference here.
"We are asking that Credit Suisse give back the profits generated by the stock exchange debut, 10 million dollars, to the indigenous peoples harmed by Samling," said Lukas Straumann of the Swiss environmental group, the Bruno Manser Fund.
Samling operates in 15,054 square miles of forest in Guyana and across Malaysia's Sarawak peninsula alone. Agence France Press, 5-4-07

The first clue to the location of the conference was the chanting which drifted out of the rainforest. ...
I had arrived at the first international forum for indigenous peoples in the Congo basin. The delegates were from settlements of ancient forest peoples - many commonly called pygmies.
Some indigenous rainforest communities dislike the word pygmy, others maintain they are proud of it. ...
These are the forests where outsiders came in waves for rubber, ivory, palm oil and timber.
They may have thought this was a land untouched by human habitation, but it was in fact already home to thousands of pygmies. ...
As a delegate from Cameroon puts it, indigenous people from the forests of central Africa are the third world of the third world. Their way of life - hunting in the forest and moving from one spot to another - makes it tricky for them to take advantage of education and health services. ...
So, for the pygmies, there are problems getting birth certificates, attending school, taking part in elections and playing an active role in the wider society.
There is also the problem of exclusion from the forests, because of logging companies.
And it is not uncommon to hear about others kept in slave-like employment, by neighbouring farmers who regard them as sub-human.
So they have come to Impfondo on the Oubangui river to meet similar forest people from across central Africa to talk and to work out how to end discrimination.
There is a willingness to modernise: in some areas they have even started using the latest global positioning satellite technology to map out their hunting grounds and sacred sites.
There is also a strong appreciation of the role education can play in helping the communities fight for their rights in the outside world.
"Of course we can take on new things that are good for us", says Stephane. "But our values are also good for the 21st Century", he says.
"We are a peaceful, egalitarian people who share and live at peace with others. These are values we ask others to copy."John James, BBC, 5-12-07

The [Taiwanese] government is planning to launch a six-year "indigenous language revitalization plan" aimed at conserving and revitalizing Aboriginal tongues, the Council of Indigenous Peoples said yesterday. ...
Only by transforming the languages into written texts and digital archives can the languages be preserved for generations to come, he said.
Taiwan has the largest number of languages associated with the Austronesian-language group, which underwent the widest physical dispersion of any language family prior to European colonial expansion to the Americas, Wang said.
Austronesian languages are spoken from the island of Madagascar off the east coast of Africa, all the way to isolated Easter Island (Rapa Nui) and extending to Taiwan, Vietnam, Northern Australia, New Zealand and most of the Melanesian and Polynesian islands.
The existence of more than 20 different Austronesian languages on a single island -- Taiwan -- is a rarity in history and philology, he added.
It is hoped that after the six-year language revitalization plan is carried out, Taiwan will turn out to be a stronghold of Austronesian language research and development and a paradigm of native language development, Wang said. ... Taipei Times/CAN, 5-12-07

To follow this vital issue more closely, and to learn what you can do, visit --