Image: Gen. George Washington in Battle During the Revolutionary War 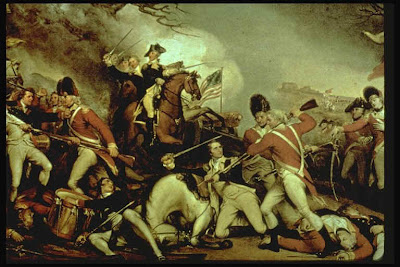 It is, as I have said before, going to be a long, hot summer in Beltwayistan.

There will be accountability. There will be hell to pay for MC Rove's soft white-boy gangsta prance at the annual Radio and Television Correspondents Dinner, and for VICE _resident Cheney's saber rattling on the deck of an aircraft carrier in the Persian Gulf.

There will be accountability.

Several news stories this last week indicate that the USA may be getting its Mojo back.

Al Gore's brilliant and powerful Assault on Reason: How the Politics of Fear, Secrecy, and Blind Faith Subvert Wise Decision-Making, Degrade Our Democracy, and Put Our Country and Our World in Peril has arrived. (Please buy it from Buzzflash and acknowledge the Internet-based information rebellion that is so vital in our struggle to save the country and the planet.)

In Assault on Reason, Gore has articulated, with gravitas, what we have been howling about for seven years plus, "It's the Media, Stupid!"

The potential for manipulating mass opinions and feelings initially discovered by commercial advertisers is now being even more aggressively exploited by a new generation of media Machiavellis. The combination of ever more sophisticated public opinion sampling techniques and the increasing use of powerful computers to parse and subdivide the American people according to "psychographic" categories that identify their susceptibility to individually tailored appeals has further magnified the power of propagandistic electronic messaging that has created a harsh new reality for the functioning of our democracy. Al Gore, Assault on Reason, Truthout

Michael Moore's SICKO debuts in Cannes tomorrow night. First, Moore and SICKO are going to electrify Cannes, and then on 6/29/07, it will be released across the USA. In the coming battle between the healthcare industry (15% of the US GDP) and Michael Moore, my money is on Moore.

VoteVets.org followed up its first "Generals' Ad Blitz" TV spots featuring Major General John Batiste (US Army retired), which was rolled out last week, with two more -- one featuring Major General Paul Eaton, another commander on the ground in Iraq that George W. Bush refused to listen to, and the other featuring Gen. Wesley Clark (US Army retired), former Supreme Allied Commander, and VoteVets member, Mike Breen, talking about what is not getting done in Afghanistan. I urge you to donate to VoteVets so that they can continue to air these ads in the home states of those Republican members of Congress who are still enabling the Bush-Cheney regime's obsession with the Mega-Mogadishu in Iraq.

Former Sen. John Edwards (D-NC) continues to up the anty in his remarkable campaign for the 2008 Democratic Presidential nomination. In his latest act of "transformational politics," Edwards is calling for this Memorial Day weekend (5/25-5/28) to be one of national protest to demand that US military be extricated from the quicksand of the Bush-Cheney debacle in Iraq. I urge you to go to http://www.supportthetroopsendthewar.com/ to support this effort. (Edwards' transformational politics certainly had a positive effect on Sens. Clinton, Obama and Biden. They all voted for Sen. Russ Feingold (D-WI) bill proposing a date certain for withdrawal from Iraq. A forthright stand they would not have taken if not for Edwards' momentum in the tall grass.)

But the most encouraging actions of conscience and courage that surfaced this week came from a newswire report that US Navy Admiral Thomas Fallon, CENTCOM commander, personally thwarted the Bush-Cheney national insecurity team's plans to launch an attack on Iran (“There are several of us trying to put the crazies back in the box.”); the Senate testimony of former Deputy Attorney General James Comey ("an account of Bush administration lawlessness so shocking it would have been unbelievable coming from a less reputable source"); and a op-ed piece rebuking of Romney, Giuliani and Tancredo and other Republican presidential candidates who embraced torture during this week's televised debate, written by Charles C. Krulak (commandant of the Marine Corps from 1995 to 1999) and Joseph P. Hoar (commander in chief of U.S. Central Command from 1991 to 1994).

Yes, I feel the Mojo rising.

Here brief excerpts from these three stories with links to the full texts:

Admiral William Fallon, then President George W. Bush’s nominee to head the Central Command (CENTCOM), expressed strong opposition in February to an administration plan to increase the number of carrier strike groups in the Persian Gulf from two to three and vowed privately there would be no war against Iran as long as he was chief of CENTCOM, according to sources with access to his thinking. ...
At a mid-February meeting of top civilian officials over which Secretary of Defence Gates presided, there was an extensive discussion of a strategy of intimidating Tehran’s leaders, according to an account by a Pentagon official who attended the meeting given to a source outside the Pentagon. The plan involved a series of steps that would appear to Tehran to be preparations for war, in a manner similar to the run-up to the 2003 invasion of Iraq.
But Fallon, who was scheduled to become the CENTCOM chief Mar. 16, responded to the proposed plan by sending a strongly-worded message to the Defence Department in mid-February opposing any further U.S. naval buildup in the Persian Gulf as unwarranted. ...
Fallon’s refusal to support a further naval buildup in the Gulf reflected his firm opposition to an attack on Iran and an apparent readiness to put his career on the line to prevent it. A source who met privately with Fallon around the time of his confirmation hearing and who insists on anonymity quoted Fallon as saying that an attack on Iran “will not happen on my watch”.
Asked how he could be sure, the source says, Fallon replied, “You know what choices I have. I’m a professional.” Fallon said that he was not alone, according to the source, adding, “There are several of us trying to put the crazies back in the box.”Gareth Porter, CENTCOM Commander’s Veto Sank Bush’s Threatening Gulf Buildup, Inter Press Service, 5-15-07

JAMES B. COMEY, the straight-as-an-arrow former No. 2 official at the Justice Department, yesterday offered the Senate Judiciary Committee an account of Bush administration lawlessness so shocking it would have been unbelievable coming from a less reputable source. The episode involved a 2004 nighttime visit to the hospital room of then-Attorney General John D. Ashcroft by Alberto Gonzales, then the White House counsel, and Andrew H. Card Jr., then the White House chief of staff. ...
Mr. Comey's vivid depiction, worthy of a Hollywood script, showed the lengths to which the administration and the man who is now attorney general were willing to go to pursue the surveillance program. First, they tried to coerce a man in intensive care -- a man so sick he had transferred the reins of power to Mr. Comey -- to grant them legal approval. Having failed, they were willing to defy the conclusions of the nation's chief law enforcement officer and pursue the surveillance without Justice's authorization. Only in the face of the prospect of mass resignations -- Mr. Comey, FBI Director Robert S. Mueller III and most likely Mr. Ashcroft himself -- did the president back down. Washington Post Editorial, 5-16-07

We have served in combat; we understand the reality of fear and the havoc it can wreak if left unchecked or fostered. Fear breeds panic, and it can lead people and nations to act in ways inconsistent with their character.
The American people are understandably fearful about another attack like the one we sustained on Sept. 11, 2001. But it is the duty of the commander in chief to lead the country away from the grip of fear, not into its grasp. Regrettably, at Tuesday night's presidential debate in South Carolina, several Republican candidates revealed a stunning failure to understand this most basic obligation. Indeed, among the candidates, only John McCain demonstrated that he understands the close connection between our security and our values as a nation. ...
As has happened with every other nation that has tried to engage in a little bit of torture - only for the toughest cases, only when nothing else works - the abuse spread like wildfire, and every captured prisoner became the key to defusing a potential ticking time bomb. Our soldiers in Iraq confront real "ticking time bomb" situations every day, in the form of improvised explosive devices, and any degree of "flexibility" about torture at the top drops down the chain of command like a stone - the rare exception fast becoming the rule.
To understand the impact this has had on the ground, look at the military's mental health assessment report released earlier this month. The study shows a disturbing level of tolerance for abuse of prisoners in some situations. This underscores what we know as military professionals: Complex situational ethics cannot be applied during the stress of combat. The rules must be firm and absolute; if torture is broached as a possibility, it will become a reality. ...
It is time for us to remember who we are and approach this enemy with energy, judgment and confidence that we will prevail. That is the path to security, and back to ourselves. Charles C. Krulak and Joseph P. Hoar, It's Our Cage, Too: Torture Betrays Us and Breeds New Enemies, Washington Post, 5-17-07